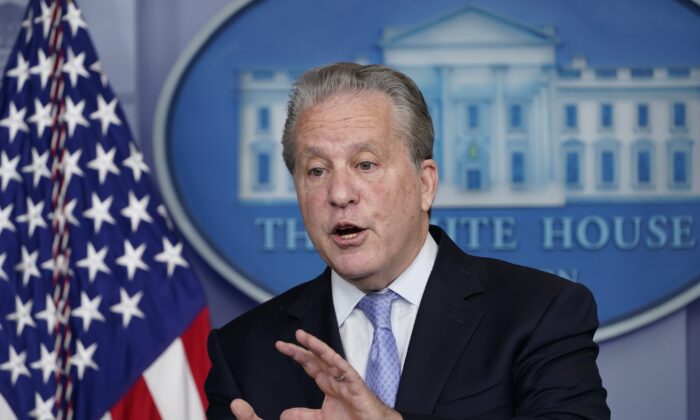 Gene Sperling, who leads the oversight for distributing funds from President Joe Biden's $1.9 trillion coronavirus rescue package, speaks during the daily briefing at the White House in Washington, on Aug. 2, 2021. (Susan Walsh/AP Photo)
US News

States and localities in November paid out the largest amount of rental assistance to cash-strapped tenants since a federal program began, the Treasury Department said in a statement Friday.

The $2.9 billion paid out is the latest sign that the program’s early hiccups have been mostly been resolved and it is now turning to helping those places running short of cash.

The latest figures show $17.39 billion has been allocated to help cover back rent, putting the program on pace to pay out or allocate $30 billion by the end of 2021. So far, there have been more than 3.1 million payments.

“We are just seeing that people got their programs started, made them simpler and more efficient,” Gene Sperling, who is charged with overseeing implementation of President Joe Biden’s $1.9 trillion coronavirus rescue package, said in an email interview. “A lot of places are moving fast and you are getting large amount of funds out quicker to renters in need.”

More than 100 grantees, including large programs in states like New York and Texas, have indicated they have gone through almost all their ERA1 money, Treasury said.

The problem, Sterling said, is there is not much to reallocate, given how states and cities have gotten so much money out. He estimated that over $1.1 billion would be allocated in the first three rounds of reimbursement, $875 million of which will be shifted from within states mostly from state-run programs to cites and counties in need.

A dozen states are shifting money to localities. Georgia, for example, is shifting $50 million to Fulton and DeKalb counties. In Arizona, $39 million is being shifted from the state to Maricopa County.

“This is a team effort, and we will continue to work with all cities and counties operating their own programs so there are no gaps in services for Arizona families,” Tasya Peterson, a spokesperson for Arizona’s Department of Economic Security, said. “This voluntary reallocation to Arizona’s population centers will help make sure that resources are available to all eligible households regardless of jurisdiction.”

Several places will get money from a pool of funds reallocated from low-performing states. California will get $62 million, New Jersey $40.8 million, New York $27 million and the District of Columbia $17.8 million.

“There won’t be huge amounts of excess funds,” Sterling said. “Reallocation will help but won’t fill the gaps of large states like Texas, New York or California that have largely committed their funds and still have significant needs.”

California welcomed the additional funds but said they fell short of the need. “While we are grateful for the infusion of additional federal resources from the U.S. Treasury, California will need significantly more funding from future federal reallocations in order to continue to meet the needs of low-income California renters impacted by COVID-19,” Business, Consumer Services and Housing Agency Secretary Lourdes Castro Ramírez said in a statement.

The initial rollout of the federal program was plagued by slow disbursement, with administration officials publicly blaming state and municipal partners for bottlenecking the process with excessive bureaucracy often aimed at preventing fraud.

More recently, the problem was that some parts of the country were expending all their money while others, especially in parts of the South, were lagging behind.

Those entities that have not obligated 65% of their ERA1 money or are found to have an expenditure ratio below 30% as of Sept. 30, based on a Treasury formula, faced having the money reallocated. Grantees could avoid losing the money if they submitted a plan by Nov. 15 showing how they would improve distribution or be able to get their distribution numbers above the 65% or 30% threshold.

The deadline for submitting a request for the second round of reallocated funds is Jan. 21. By statute, the process for reallocating ERA2 funds won’t begin until March 31, 2022.