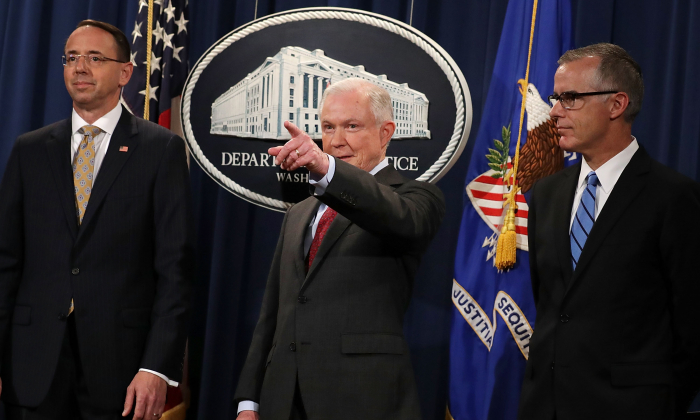 The hunt for leakers that was initiated by Attorney General Jeff Sessions in August of last year yielded a major arrest on Oct. 16, with the apprehension of a Treasury Department employee on charges that she leaked financial intelligence documents on various subjects of the Russia investigation to a reporter at BuzzFeed News.

Natalie Edwards, a senior advisor at the Treasury Department’s Financial Crimes Enforcement Network (FinCEN), began leaking the documents to an unidentified reporter in October last year and continued to do so until this month, according to court documents.

Edwards is facing one count of unauthorized disclosure of suspicious activity reports (SARs) and one count of a conspiracy to do the same. Both charges carry a maximum sentence of five years in prison.

BuzzFeed News published 12 articles as a result of the leaks, according to the court complaint. The subjects of the articles included several people linked to the Russia investigation led by special counsel Robert Mueller, including veteran political operative Paul Manafort; his associate, Rick Gates; a former Russian ambassador to the United States; and others.

The leak investigation was triggered when articles surfaced detailing facts gathered from SARs, the disclosure of which is a felony. The court complaint was detailed by special agent Emily Ecksut from the FBI’s public-corruption squad.

Several of the BuzzFeed News articles specifically indicated that the reporters reviewed SARs, others included enough information to ascertain that BuzzFeed had received the FinCEN documents.

The Treasury Department receives reports from financial institutions and maintains a database which can be accessed by law enforcement for the purpose of preventing criminal activity, including money laundering.

Although the complaint doesn’t disclose the name of the reporter, a review of the articles and their authors by The Epoch Times determined that BuzzFeed news writer Jason Leopold was the most likely recipient of the leaks. Leopold didn’t respond to a request for comment.

When FBI agents interviewed Edwards, she initially denied having any contacts in the media, but eventually admitted to communicating with the reporter and meeting him twice. Edwards denied knowing that her leaks resulted in media reports, but the FBI has evidence of her internet usage, which includes searches for articles which resulted from her alleged leaks.

Edwards worked with at least one co-conspirator, an associate director at Treasury, according to the documents. Ecksut alleges that the associate director, who isn’t named in the complaint, exchanged hundreds of messages with the same reporter as Edwards.

Edwards saved approximately 24,000 files on a department-issued flash drive between January 2017 and January 2018. A forensic review of the files determined that they included thousands of SARs, including all of the SARs cited in the leaked articles, the court documents state.

During the course of the probe, investigators gained access to Edwards’s private email and phone records. The investigators also used a digital pen register to track messages sent from her encrypted messaging app.

According to the court documents, Edwards communicated with the reporter via email, phone, and an encrypted messaging application meant to protect the communications from capture by third parties, including law enforcement. FBI agents were able to view some of the encrypted messages upon obtaining Edwards’s phone. The messages suggest that in addition to leaking, Edwards performed SAR database searches at the behest of the reporter, according to the FBI.

Edwards’s arrest comes on the heels of several leaked stories linked to the Russia probe.

On Oct. 15, the FBI released a disciplinary review file on former FBI Deputy Director Andrew McCabe. The file showed that McCabe was investigated over a leak about Lt. Gen. Mike Flynn and President Donald Trump. Flynn was charged by Mueller with lying to the FBI as part of the Russia investigation. McCabe was fired earlier this year for authorizing another leak and lying about it under oath.

Also on Oct. 15, James Wolfe, the former director of security for the Senate Select Committee on Intelligence, pleaded guilty to lying to the FBI as part of a probe into unauthorized leaks. One of the leaks listed in a statement filed with Wolfe’s plea deal was related to the Foreign Intelligence Surveillance Act warrant to spy on Trump campaign volunteer Carter Page. In the warrant, the FBI alleged that Page is a Russian agent. Page was never charged with a crime, and denies the allegation.

The Office of the Inspector General for the Treasury Department assisted the FBI in the investigation. On the day that the arrest of Edwards became public, Deputy Attorney General Rod Rosenstein told inspectors general at an awards ceremony that “preventing inappropriate disclosures of confidential information is one of the important issues I focused on during the past year.”

“Disclosing non-public, sensitive information you learn as a government employee may jeopardize an investigation or case; prejudice a defendant’s rights; or unfairly damage a person’s reputation,” Rosenstein said. “It also can violate federal laws, employee non-disclosure agreements, and individual privacy rights. In some cases, it may put a witness or law enforcement officer in danger.”

A Justice Department official told The Epoch Times that the arrest is part of the hunt for leakers that was announced by Sessions last year. The attorney general assigned Rosenstein and FBI Director Christopher Wray to oversee all of the leak investigations and monitor their progress.

“We are taking a stand,” Sessions said, at the time. “This culture of leaks must stop.”