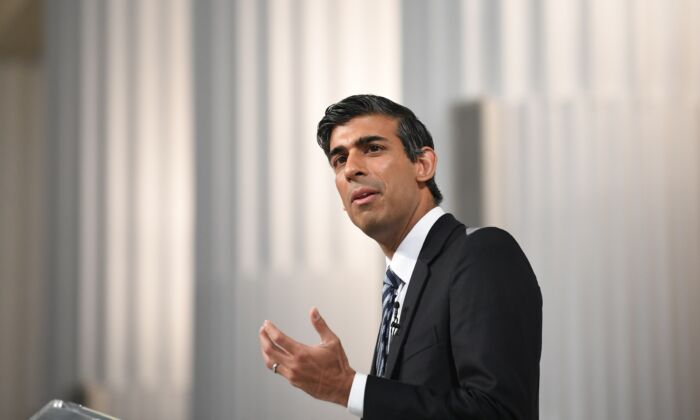 Chancellor of the Exchequer Rishi Sunak at the Financial and Professional Services Address, previously known as the Bankers dinner, at Mansion House in the City of London, on July 1, 2021. (Stefan Rousseau/PA)
UK

The Chancellor has insisted the Treasury acted “entirely appropriately” in its handling of David Cameron’s lobbying on behalf of Greensill Capital.

Rishi Sunak said the issue “did not take up a very significant part of my time” or that of officials but it was “right to listen to Greensill’s initial proposal.”

Cameron lobbied for the lender, which collapsed earlier this year, to be involved in a government COVID-19 support scheme but Sunak said the proposal was “promptly rejected.”

In a report in July, the Commons Treasury Committee said lobbying rules should be tightened and criticised the Treasury for failing to direct Cameron into “more formal methods of communication” after his initial contact with officials.

“The report also calls on the Treasury to put in place more formal processes to deal with any such lobbying in the future.

“I would note in this regard that, throughout the period of Greensill’s engagement, all substantive discussions with Greensill were properly handled and recorded.

“This not only ensured that the department was able to engage with the committee’s subsequent inquiry accurately and in considerable detail but also that I was receiving high-quality and evidence-based analysis of the proposals put forward, which I ultimately rejected.”

Sunak said the MPs’ report “expresses doubt that Mr. Cameron’s lobbying did not result in the Treasury treating Greensill differently” but insisted “Greensill and supply chain finance did not take up a very significant part of my time, nor of [senior official] Charles Roxburgh’s, nor of the department’s overall, particularly compared with other COVID interventions.”

He said it was “right to listen to Greensill’s initial proposal, which we promptly rejected.”

Sunak said the government had commissioned a report by lawyer Nigel Boardman into lobbying and would respond to its recommendations “in due course.”

The Chancellor added, “I am proud of our response to the COVID crisis and believe that the department acted entirely appropriately in relation to Greensill.”

He told MPs the Treasury was “exploring a number of potential policy avenues” about financial regulation following concerns raised by the committee about the way Greensill operated and got into trouble.

Deputy Labour leader Angela Rayner said: “Ministers need to stop trying to defend themselves over the Cameron lobbying scandal and start changing the broken system that is supposed to stop this dodgy lobbying.

“The fact that David Cameron didn’t break the rules as part of his cross-government WhatsApp campaign to land himself a £200 million [$273.5 million] payday is proof that the rules that are supposed to regulate lobbying are completely broken and need to change.”