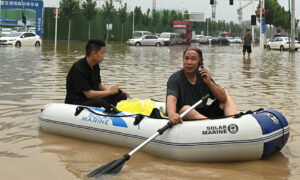 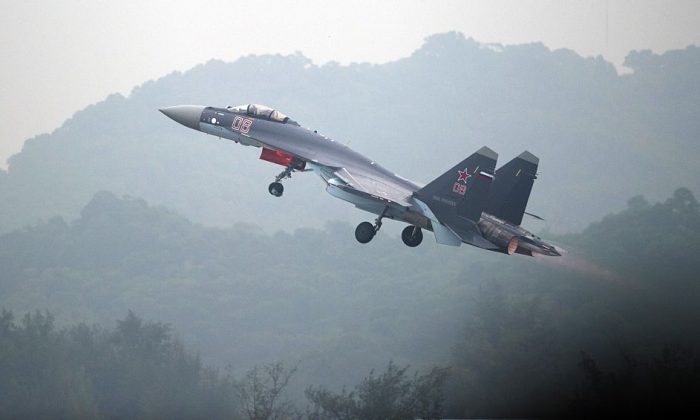 A Sukhoi SU-35 fighter jet takes off during a test flight ahead of the Airshow China 2014 in Zhuhai, a city in southern China's Guangdong Province, on Nov. 10, 2014. (Johannes Eisele/AFP/Getty Images)
Chinese Regime

China has long considered Russia its key ally. But the apparent friendship hasn’t stopped Beijing from resorting to industrial espionage and theft operations against its northern neighbor.

Team29, a nonprofit association for lawyers and journalists based in St. Petersburg, published on its website an article detailing the case against Roman Dmitriev, an aviation technologist at a manufacturing plant run by Russian aircraft maker SC Sukhoi Co. in Komsomolsk-on-Amur, a city in Russia’s Far East.

The plant, formerly an independent company called Komsomolsk-on-Amur Aircraft Production Association (KnAAPO) before consolidating with Sukhoi in 2013, is in charge of manufacturing different models of Sukhoi fighter jets, including the Su-27, Su-33, and Su-35, and Su-57, which is the latest available model on the market known for its stealth capability.

Dmitriev, 27, was convicted of treason and was sentenced to four and a half years in prison by a Russian court in Khabarovsk in October 2017. He had been arrested and detained since April 2016.

Dmitriev was found guilty for leaking classified information about Su fighter jets and other “state secrets” when he left comments on a Russian aviation online forum Airforce.ru. In one of his comments, he wrote about Russia’s deals to sell fighter jets, including the Su-35, to China between 2016 and 2020, as well as planned purchases of Su-35s by Indonesia and Pakistan.

Team29 didn’t indicate who or which country might have benefited from the information that Dmitriev posted on the Internet.

China has purchased Su-35 fighter jets since at least 2014, when Beijing bought 24 for $2.5 billion, according to U.S. bimonthly magazine the National Interest. While China has so far received 14 jets from that initial order, Russian state-backed Sputnik News reported on Nov. 6 that the remaining aircraft will be delivered by 2020.

According to the Team29 article, Russian law stipulates that information about military-technical cooperation with other countries—in this case, the sale of jets to China—is considered a state secret. Any disclosure before the official announcement, such as what Dmitriev was accused of, could harm Russia’s national security. If found guilty of treason, the maximum sentence is 20 years in prison.

The court also charged Dmitriev with handing over information about Russia’s development of the Su-57 to a person identified by the court as an Israeli intelligence agent.

Dmitriev began working at KnAAPO as a mechanic before being promoted to be a technologist in the manufacturing department. According to the Team29 article, Dmitriev didn’t have the necessary clearance to be able to access the company’s secret documents, but obtained them through a corporate network. Another employee put those documents on the network.

Team29 noted that two other users of the online forum were arrested for treason in 2018.

While there is no indication that the latest treason case was directed by the Chinese regime, Beijing has a well-documented record of stealing military technology from Russia since the 1990s.

The most notable theft involved the Su-27, the production rights to which were sold by Russia to China in 1996. However, Russians have since claimed that Beijing violated the licensing agreement to produce knock-off, unlicensed versions by reverse engineering and modifying the original hardware. That includes China’s J-11, the design of which is based on the Russian fighter jet, according to National Interest.

Recently, China was also accused of copying Russian civilian aircraft. The joint venture behind the CR929 passenger jet, a model built through joint Sino-Russia cooperation and unveiled at the Zhuhai Airshow in southern China’s Guangdong Province on Nov. 7, was accused by Russian design company OKB Atom of plagiarism, according to Russian online newspaper Vzglyad. While Russia’s United Aircraft Corp. and China’s state-owned Commercial Aircraft Corp. had established a Chinese venture for the project, OKB Atom claimed that the venture’s CR929 design was stolen from its own plans, which had been submitted for another Chinese passenger plane project in 2016.

There have also been a few incidences of espionage uncovered by Russian authorities that benefited Beijing.

In June 2012, a court in St. Petersburg sentenced two professors, Svyatoslav Bobyshev and Yevgeny Afanasyev of Baltic State Technical University, to 12 and a half and 12 years, respectively, in prison, according to Russian news site Gazeta. Bobyshev was found guilty of “committing high treason in the form of giving state secrets” to China; Afanasyev was his co-conspirator.

The professors were accused of giving Chinese intelligence officials information about Russia’s Bulava ballistic missile system, which is used by Russian submarines, in exchange for $7,000. They transmitted the information while on trips to China to give lectures at Harbin Polytechnic University between 2007 and 2009, The university is located in northern China’s Heilongjiang Province. They began giving lectures in Harbin in 2003, and were arrested in 2010.

In October 2011, Russia’s security service FSB revealed that it had arrested an alleged Chinese spy named Tun Sheniyun a year earlier, for posing as a translator in order to obtain information about Russia’s S-300 anti-aircraft missile system, according to The Guardian. Russia had sold and delivered 15 S-300 systems to China in 2010

Ruslan Pukhov, a defense analyst and director of the Moscow-based Centre for Analysis of Strategies and Technologies, told The Guardian that Tun’s case was probably the result of Beijing having difficulty cloning S-300 and wanting to get its hands on more documents about the missile system.