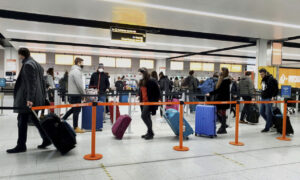 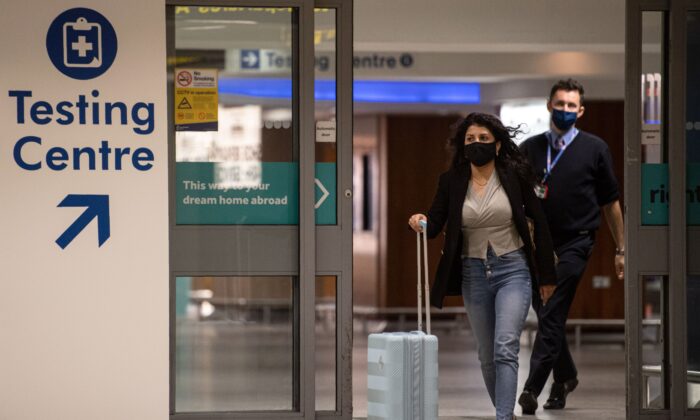 Travellers to England Will Need to Test Negative Before Departure

International travellers arriving in England, including UK nationals, will have to provide proof of a negative test for the CCP virus before boarding their planes, trains, or boats.

This new measure, announced by the Transport Secretary on Friday, aims to stem the influx of new strains of the virus.

On top of the new measures, arrivals from countries outside of the “air corridor” list will still have to quarantine for 10 days.

According to the government’s announcement, people will be subject to an immediate £500 ($680) fine if they fail to “present a negative COVID-19 test taken up to 72 hours prior to departure.”

Passengers will have to present proof of the test to carriers, and declare it on a form.

“The UK Border Force will conduct spot checks on arrival into England to ensure that passengers are fully compliant,” the department said in a statement.

“Taken together with the existing mandatory self-isolation period for passengers returning from high-risk countries, pre-departure tests will provide a further line of defence—helping us control the virus as we roll out the vaccine at pace over the coming weeks,” Shapps said in the statement.

The UK has been criticised for being both slow to shut down international travel in the first wave last spring, and for then dragging its feet in setting up testing systems that had allowed air travel to continue more smoothly in other nations.

“However, Labour has been calling for a comprehensive strategy on testing for international travel since April,” he said in a statement. “Instead the Government has been lurching from one crisis to another.”

The chief executive of Airlines UK, Tim Alderslade, said that while the new testing requirement was needed now, it should be only a short-term, emergency measure.

“Once the roll-out of the vaccine accelerates, the focus must be on returning travel to normal as quickly as possible in order to support the UK’s economic recovery,” he said in a statement.

Passengers from outside the “travel corridor” list can reduce their quarantine time from 10 to 5 days by paying for a private test.

According to Mark Jit, professor of vaccine epidemiology at the London School of Hygiene & Tropical Medicine, testing incoming travellers before departure is generally only helpful in two situations: when the virus levels are low, and when the epidemic is close to a tipping point.

“These restrictions may also make a difference if you are trying to keep a new strain of coronavirus out of your country, and hardly anyone in your country has that strain yet,” he said in a statement.