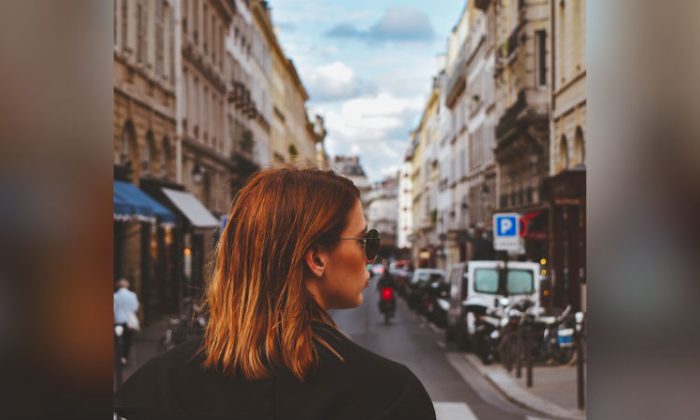 A Swedish Instagram influencer has been caught posting “fake traveling” photos of herself in Paris that appear to have been digitally manipulated in Photoshop. Despite widespread criticism, Johanna Olsson has not taken the photos down and has instead issued a public statement to explain what happened.

The London-based woman has more than 510,000 followers on her Instagram account. The 28-year-old was criticized after posting photos of her all-expenses-paid October trip to Paris to model and promote brands.

However, many fans are concerned about the authenticity of the photos. One of the images features Olsson floating on a bridge over the River Seine.

Another photo shows Olsson posing at an outdoor bistro. Fans said the photo is clearly fake due to a white outline around her head and an umbrella that appears to have been removed from the table behind her. Many describe it as a “terrible Photoshop job.”

“Look at this hahahaha the Photoshop is insane. The umbrella has been removed and trees put in LOL,” said one person.

“My cat does better [at using] Photoshop,” said another.

In another image, Olsson holds a glass of wine as she poses for a photo supposedly taken near the Louvre.

“All your pictures about France are photoshopped. Please get a ticket and visit to France. Believe me it’s gonna be cheaper than making Photoshop[ped images],” one Instagram user commented on the post.

“Next time hire me, I Photoshop much better,” another user suggested.

Olsson explained why she resorted to editing her pictures.

In an Instagram story, cited by pop culture site Mamamia, Olsson said: “I wanted to talk a little bit about the pictures I posted in Paris. So I did one picture, shot it and didn’t think it looked that nice … so I took a different background and put the background into it,” she said.

“And when I put it up nobody noticed, so I thought this is good,” she said. “I admit it wasn’t my finest Photoshop skills.”

Olsson said she has been invited to Sweden to speak on TV shows about her ‘fake traveling’ experiences.

“It’s a bit ridiculous I think. There are a lot of influencers out there that Photoshop in birds, rainbows or crazy skies and I could do that but I don’t like that,” she said. “I just wanted to make that clear that I was in Paris but I did Photoshop the background but I’m not going to take them down because it’s a collaboration.”

“And they’re nice pictures—it’s a good outfit!” she added.

Some fans are more forgiving. Josephine Parsons, who writes for Australia’s Honey Nine Digital, described Instagram as a window to a world of fantasy.

“Frankly, she has a point,” Parsons said. “The expectations vs. reality nature of Instagram is damaging, yes but we’re all kidding ourselves if we think most influencers steer clear of Photoshop or, if they’re portraying the truth 100 percent of the time.”

“The platform is a fantasy and we’re pretty clued into that by now—Olsson has just let us peer behind the curtain. By keeping the photos up on her profile, she’s done something a lot more revolutionary than shamefully deleting them and issuing an apology. And yes, those are some good outfits, girl.”