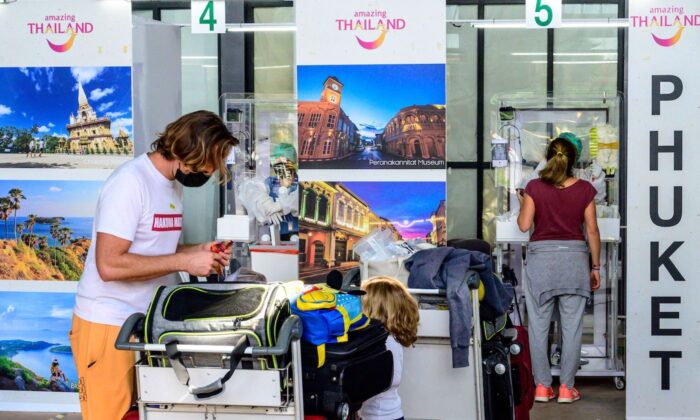 Passengers wait for a PCR swab test for COVID-19 after arriving at Phuket International Airport in Thailand on Nov.1, 2021. (Mladen Antonov/AFP via Getty Images)
Asia & Pacific

Travelers Infected With COVID-19 No Longer Banned From Entering Thailand

Thailand will soon allow entry of foreign travelers who are infected with the COVID-19 virus, following the cabinet’s approval to remove the disease from the list of illnesses that bar visitors’ entry into the country.

Deputy government spokesperson Rachada Dhnadirek said Tuesday that the change would take effect after it was published in the Royal Gazette, according to Bangkok Post.

However, she noted that visitors with dangerous stages of tuberculosis, leprosy, elephantiasis, third-stage syphilis, chronic alcoholism, and drug abuse-related disease are still barred from entering Thailand.

The move comes as Thailand has seen a rebound in its tourism sector, with 3.78 million tourist arrivals from January to August, the majority of which came from Malaysia, India, and Singapore.

Thailand’s Centre for COVID-19 Situation Administration (CCSA) said Tuesday that it plans to implement measures to promote the tourism sector as the number of daily instances of COVID-19 have decreased, with 774 new cases reported on Tuesday.

“The government is working on a plan to come up with measures to promote tourism to accommodate more tourists during the [coming] peak season,” deputy government spokesperson Traisuree Taisaranakul said.

Thailand’s cabinet has also approved the move to extend the duration of the visa-on-arrival—which applies to nationals from 19 countries including India, China, and Saudi Arabia—from 15 to 30 days starting in October.

In addition, the maximum stay for visa-exempt travelers will also be extended from 30 days to 45 days. Taisaranakul said the change to visa duration will take effect from Oct. 1, 2022, to March 31, 2023, local media Thaiger reported.

“We are looking to extend their stay as this will help boost tourist spending, revive the economy and reduce the impact of the pandemic,” Taweesilp said.