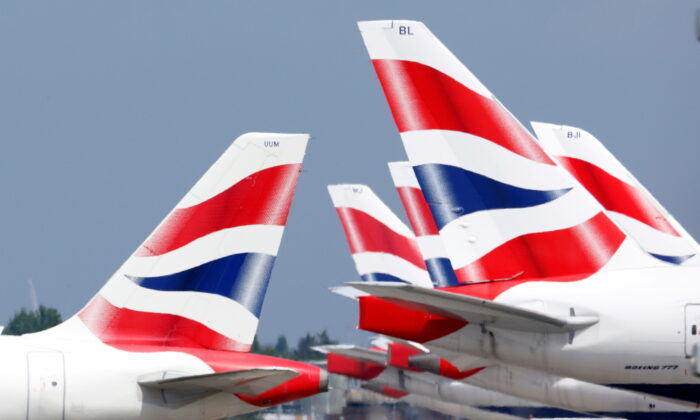 British Airways tail fins are pictured at Heathrow Airport in London, on May 17, 2021. (John Sibley/Reuters)
UK

Travel Restrictions Have Almost No Impact on Spread of COVID-19 Variants: UK Study

The impact of travel restrictions on the spread of CCP (Chinese Communist Party) virus variants is “very limited,” a new study has shown.

Governments are not able to implement travel restrictions quickly enough for them to be effective in limiting the spread of new COVID-19 variants, said a Jan. 21 report by Edge Health and Oxera, a specialist research consultancy that works with Britain’s National Health Service (NHS).

It takes several weeks before governments become aware of new variants, and even longer to assess if they are variants of concern, the study found. By the time a new variant has been discovered and assessed, it is too late for restrictions to make any difference.

In the case of the Omicron variant, it was first detected on Nov. 8, 2021, but was identified by the World Health Organisation (WHO) as a variant of concern only on Nov. 26.

“Therefore, for a month before it was identified as a concern, Omicron was in circulation internationally and being seeded in the UK, despite the travel testing regime in place,” said the report.

To limit the spread of Omicron, the UK government quickly introduced a series of travel restrictions, including putting six African countries on the travel “red list” on Nov. 26 and requiring a Day 2 PCR test from the following day. From Dec. 7, a pre-departure test was also required to enter the UK.

Despite the measures, by Dec. 15 Omicron was already highly prevalent in the UK. Acknowledging the fact, the UK government removed all countries from the red list. The pre-departure test and the requirement to self-isolate on arrival until they receive a negative test were also scrapped on Jan. 7.

However, those arriving in England will still need to take a lateral flow test no later than the end of day two, and if positive, a further PCR test.

Travel industry groups Airlines UK and Manchester Airports Group (MAG), which commissioned the study, argue that the remaining restrictions should also be scrapped.

Airlines UK CEO Tim Alderslade said: “Testing restrictions for the fully vaccinated make no sense at all given the delay in governments being able to detect and act on the arrival of a new variant, as we saw with Omicron.

“Not only do they fail to suppress the international spread of variants, they place a disproportionate burden on the travel sector and those that rely on the connectivity aviation provides.”

Analysis undertaken by Oxera in December 2021 indicated that Omicron travel restrictions could lead to a £1.5 billion ($2 billion) loss in tax revenue over the next year.

“We must allow the country’s worst hit sector to resume its road to recovery, and for the UK economy to benefit from the billions of pounds of economic value aviation generates,” he said.