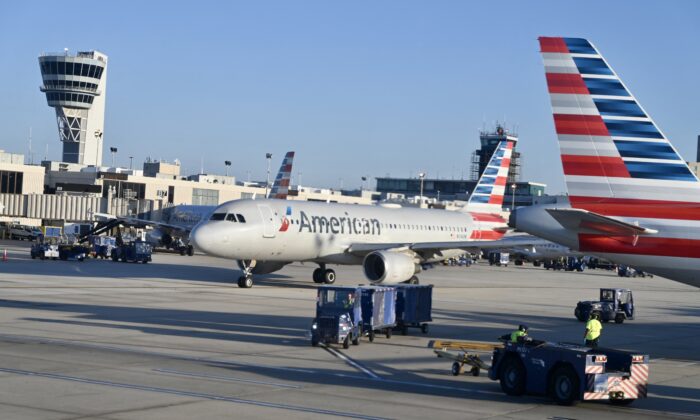 Travel Chaos: Who Is to Blame for Thousands of Canceled Flights?

Buttigieg threatens airlines over canceled flights, but carriers say the problem is a shortage of air traffic controllers
By Kevin Stocklin

Airlines canceled thousands of flights this week, blaming staffing shortages, as Americans return to traveling in droves this summer. But airlines and the federal government are at odds over which staffing shortages are the fundamental cause.

More than 1,400 flights were canceled in the United States yesterday, and more than 5,800 were significantly delayed. Airlines started the summer travel season by canceling approximately 2,800 flights in the United States around Memorial Day and with the July Fourth weekend coming up, there appears to be no relief in sight. Worldwide, more than 21,000 flights were canceled or delayed yesterday.

On busy summer travel days, the number of passengers often exceeds 2 million per day. With staffing stretched tight, any disruptions, including from weather, severely tax airlines’ ability to recover and get passengers to their destinations. James Ferrara, president of InteleTravel, a travel agency, said passengers just experienced “another travel Armageddon weekend.”

Transportation Secretary Pete Buttigieg held a virtual meeting with airline executives last week to demand that they hire more staff, and then had his own flight from Washington, D.C., to New York canceled the following day, forcing him to drive. Many have claimed a pilot shortage is at the root of it all. But airlines say the major cause of flight delays is the Federal Aviation Administration (FAA) and a shortage of air traffic controllers.

This week, United Airlines CEO Scott Kirby announced that his company was cutting 50 flights per day out of Newark Airport, one of its major hubs, but not because the airline lacks capacity. “Air traffic control is understaffed,” Kirby said in a CNN interview, “and because of that, there’s just more flights than the airport can handle.” He said the most important things the government can do to alleviate cancellations are to “limit the amount of flights to the number that the airport can theoretically handle … and get the air traffic control towers back to full staffing.” Kirby told Bloomberg News on June 20 that at Newark, “we have had weekends where [air traffic control] staffing is under 50 percent,” adding that at United, “we do not have any staffing issues.”

In May, Jet Blue, Southwest, and Frontier Airlines blamed a shortage of air traffic controllers for delays and cancellations of thousands of flights in Florida. In response, the FAA pledged to “immediately increase the number of authorized staff.”

During his meeting with airlines, Buttigieg demanded that they “stress test” their ability to handle summer traffic, and threatened that the U.S. Department of Transportation would “take enforcement actions” against airlines if cancellations continued at the current rate.

Many airlines have responded to the current crisis by cutting routes, particularly to smaller, less profitable cities. American Airlines cited a pilot shortage as the reason that it was canceling routes to Dubuque, Iowa; Toledo, Ohio; and Islip and Ithaca, New York. The Department of Transportation has pushed back against reducing service to small cities, pressing SkyWest airlines to continue service after it had announced it was pulling out of 29 locales, including Sioux City, Iowa, because it couldn’t hire enough pilots.

But the Air Line Pilots Association (ALPA), a pilot’s union representing 64,000 pilots at 39 airlines, said pilot shortages are not the problem, pointing out that 8,000 newly certified pilots have signed on in the past year. The ALPA called the pilot shortage “a problem that doesn’t exist.”

According to an ALPA statement, “The United States is producing more pilots today than we did pre-pandemic.” The attempt to demand more pilots will only weaken safety standards, ALPA stated. “Let’s stop the double speak and call this for what it is: a blatant attempt to weaken first officer qualification requirements, despite the fact that the United States has more than enough qualified pilots now.”

Airlines suffered a brutal reduction in passenger traffic in 2020 because of the COVID-19 pandemic, government lockdowns, and other transportation regulations. According to a study by McKinsey, a management consultancy, “airlines hemorrhaged $168 billion in economic losses in 2020.”

Airlines responded by cutting about 90,000 jobs that year, reducing staff to levels not seen since the 1980s. In addition, many airlines demanded that pilots and attendants be vaccinated or lose their jobs. United announced in March that it would let unvaccinated workers return, after having fired more than 200 of them and putting another 2,200 on unpaid leave. At the time, President Joe Biden, who attempted to force vaccines on most American workers as a requirement to keep their jobs, praised the airline for this policy.

But airlines are now hiring aggressively to meet a dramatic uptick in demand. Southwest Airlines told The Epoch Times, “We’ve hired more than 14,500 employees in the past 12 months, and we’re on track to hire more than 10,000 Southwest employees in 2022.” The airline plans to restore 85 percent of its pre-pandemic flight schedule by the end of this year.

Giving a nod to racial and gender diversity, United Airlines pledged in April 2021 that half of its new pilot hires would be “women or people of color.” Racial and sexual discrimination by private companies is illegal under the 1964 Civil Rights Act, however, and it is unclear how these quotas are affecting the airline’s staffing goals.

Meanwhile, airline passengers should prepare for a difficult, frustrating experience this summer.