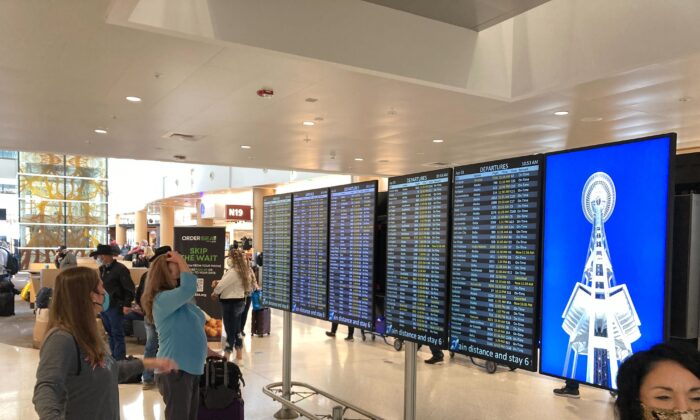 Travelers at Seattle-Tacoma International Airport check the status of flights, including a few that were canceled, on displays inside a gate terminal in Seattle on April 1, 2022. (Ted S. Warren/AP Photo)
Regional News

Airlines canceled or delayed thousands of flights across the United States over the weekend as companies blamed severe weather in Florida for the chaos.

The Federal Aviation Administration confirmed on April 2 that it placed a limit on flying over Florida because of severe thunderstorms passing over the region.

As of the morning of April 4, there were approximately 500 canceled and 1,050 delayed U.S. flights, according to FlightAware.

JetBlue Airways was among the most heavily affected on April 3, canceling about 30 percent of its flights, the website data show. As of April 4, more than 135 JetBlue flights were canceled.

“We have unfortunately had to cancel flights this weekend, and today’s cancellations will help us reset our operation and safely move our crews and aircraft back into position,” the spokesman told WHDH in Boston.

Other companies that saw cancellations or delays en masse include Spirit Airlines, American Airlines, and Delta Air Lines. Spirit saw about 27 percent of its flights, or 223 flights, canceled on the morning of April 4.

Southwest Airlines stated that it suffered unspecified technology issues early on April 2 that affected its flights.

“We are experiencing flight disruptions across our network today due to briefly pausing our service earlier this morning as we worked to resolve an intermittent technology issue, as well as ongoing weather challenges impacting multiple areas within our system,” Southwest Airlines wrote on April 2.

Data from FlightAware show that Southwest saw about 980 flights canceled and 2,300 flights delayed across the United States over the weekend. The Dallas-based firm also told media outlets that “ongoing weather challenges” were “impacting multiple areas within our system.”

On April 1, Alaska Airlines canceled about 100 flights as off-duty pilots protested over contract negotiations, according to reports.

“Alaska Airlines failed to properly plan for increased travel demand and take the steps necessary to ensure it attracted and retained pilots,” the Alaska Airlines pilot union said in a statement.

“Now, they’re trying to distract the public from their mismanagement and blame the pilots who helped save their company. Pilot leaders have been warning for years that pilots will choose to fly for other airlines due to an inadequate contract that will only exacerbate existing staffing challenges.”