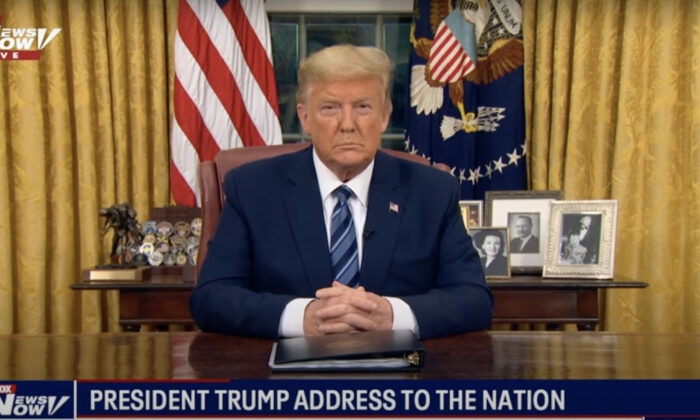 At some point, we need a clear timeline based on what we know so far from books, FOIA requests, and other public information. We also need investigations that must begin in earnest if there emerges a new Congressional majority.

In the meantime, it makes sense to at least note the important dates, and March 12, 2020, is one. It’s the second anniversary of the travel restrictions from Europe imposed solely at the discretion of the U.S. president.

For me, it was a shocking day. I had no idea that the president possessed such power, much less that he would do it on his own. The virus was already here and the effort probably made no difference in mitigation efforts. Even if it did—counterfactuals are really impossible here—the only effect was to delay the date at which nearly every American would eventually encounter the virus. That finally happened nearly two years later.

Flattening the curve was just another way of saying: prolong the pain. And that was a painful night. You can watch it if you haven’t seen it. The speech knocked me off my feet. It was a foreshadowing of disaster.

President Trump was not at his best, very obviously. He made two very serious missteps. He said he was blocking travel from Europe but in fact the text of his order pertained only to foreign nationals, not American citizens. Further, he disastrously misread the teleprompter and said that goods traffic would be stopped too.

Here is what he said:

To keep new cases from entering our shores, we will be suspending all travel from Europe to the United States for the next 30 days. The new rules will go into effect Friday at midnight. These restrictions will be adjusted subject to conditions on the ground.

There will be exemptions for Americans who have undergone appropriate screenings, and these prohibitions will not only apply to the tremendous amount of trade and cargo, but various other things as we get approval. Anything coming from Europe to the United States is what we are discussing.

That required the White House to issue two important corrections the next day. “The White House later tweeted that the travel restriction applies only to most foreign nationals who’ve been in the 26-nation Schengen area of Europe in the two weeks before their scheduled arrival in the United States,” said the corrected news. Further, the president himself tweeted: “very important for all countries & businesses to know that trade will in no way be affected by the 30-day restriction on travel from Europe. The restriction stops people not goods.”

There was one additional error of less significance. He said that the government would pay for all Coronavirus “treatment” whereas the text said testing.

I’ve not been able to find the original draft of the speech to see precisely how Trump mangled the text in each case. He was either nervous or the speech had been too hastily written. Regardless, the damage was done. U.S. airports suddenly faced crushing traffic from abroad as never before, with “social closening” for up to 8 hours. If you wanted to stop the spread, this was not the way to do it. The stock market also crashed upon opening.

Just as interesting is to discover the stated reasons for the policy. No question: it was to suppress and kill the virus. This was a preposterous mission from the beginning, as any infectious disease expert could have explained to him. But instead he only had a few advisers, primarily Anthony Fauci and Deborah Birx. It was they who urged him to shut everything to control the pathogen coming from China.

Here is what he said:

“We will ultimately and expeditiously defeat this virus….”

“Each of us has a role to play in defeating this virus.”

“If we are vigilant — and we can reduce the chance of infection, which we will — we will significantly impede the transmission of the virus. The virus will not have a chance against us.”

That message revealed the incredible extent to which he had been misinformed. It did not work of course. And yet the policies persisted, even long after Trump himself had decided that they did not make sense.

At the same time, the message contained some truth that did not make sense in light of these draconian measures:

If he had said that and only that, behavioral changes would have followed, and there would have been immediate efforts to apply focused protection for the old and sick. It’s possible that this would have been all that was necessary. But this advice was very much at odds with the also-stated and completely impossible goal of “defeating” the virus.

Thus was the confusion there from the beginning and pretty much remained there for two full years until most of the population had become infected. The demographics of severe risk are identical today to what was known from January and February of 2020. It is the old and sick who are mostly at risk. It is they who should have been the main focus of the vaccine, never mandates but rather made available.

For everyone else, Trump was correct. The risk was and is “very, very low.”

This was a turning point not only in the Trump administration. Pollsters agree that the Covid response not only cost him the Presidency but his party also lost the Senate and secured minority status in the House. It was a turning point for American liberty and the general stability of the world economy. It set in motion all that we currently endure, including emergency powers, egregious mandates, inflation, stagnation, demographic upheaval, ill-health, cultural disorientation, and arguably war too.

So far as I can tell, this day is not being marked by anyone in the national media, which further shows how far we have to go before we get clarity about the crisis of our times. Even more astoundingly, the consensus seems to be not that we undertook egregious actions to achieve the impossible at great expense to life and liberty but rather that most nations including the United States did not act soon enough with even more impositions.

No one is safe until this consensus changes.