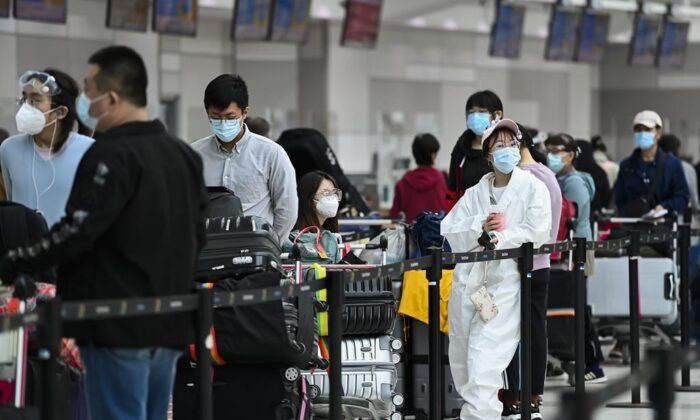 People line up and check in for an international flight at Pearson International airport in Toronto on Oct. 14, 2020. (The Canadian Press/Nathan Denette)
Canada

An advocacy group is preparing a legal challenge to the federal government’s requirement that Canadians must be fully vaccinated in order to board planes, trains, and marine passenger vessels.

“Preventing millions of Canadians from travelling by plane or train is a gross infringement of their civil liberties, and is guaranteed to hurt their employment, businesses, and ability to feed their families,” Allison Pejovic, staff lawyer at the Justice Centre for Constitutional Freedom (JCCF), said in a statement.

“Parliament has not been consulted about this blatant violation of section 6 of the Canadian Charter of Rights and Freedoms, which provides that Canadians have the right to freely enter and leave the country.”

During the election campaign, Conservative Leader Erin O’Toole said he was opposed to the measure. The Epoch Times contacted the party to find out if there are plans to oppose the move in Parliament, but didn’t hear back by the time of publication.

The measure took effect on Oct. 30, with a grace period until Nov. 30 for travellers to get fully vaccinated.

Every Canadian travelling by plane, rail, or ship (non-essential passenger vessels on voyages of 24 hours or more) must be vaccinated, even if coming from abroad to visit or resettle. Some “very limited exceptions” are in place for those with medical exemptions or living in remote communities.

The government states the measure “helps limit the risk of spreading COVID-19 and helps prevent against future outbreaks.”

According to the JCCF, “medical and scientific evidence establishes” that the vaccines do not prevent transmission, that both the vaccinated and unvaccinated can catch and spread the virus equally, and that natural immunity is as effective or more than the protection offered by the vaccines.

The JCCF currently has other active cases challenging COVID-19 government measures, such as the vaccine mandate for federal employees and the vaccine passport in Ontario.

“The courts so far have been reluctant to second-guess public health officials or to uphold Canadians’ constitutional rights and freedoms,” she told The Epoch Times via email.

“There has been significant judicial deference to government during the pandemic, when Canadians have faced unprecedented violations of their civil liberties, and experienced significant mental harms.”

“These issues are novel and there are few Canadian precedents to draw from in considering the legal merits of vaccine mandates, so significant U.S. decisions are hopefully going to have some influence on Canadian courts,” she says.

A spokesperson for Transport Canada said the department is aware of the potential court challenge, but would not speculate on the matter since the case has yet to be filed.