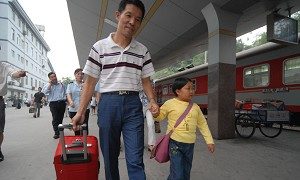 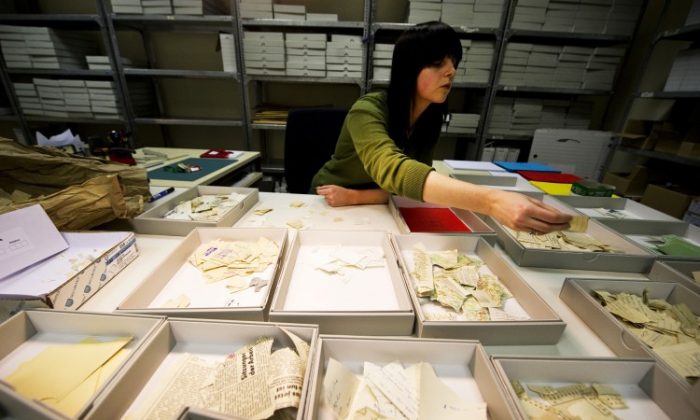 The reconstructed contents of 500 trash bags offer new insights into the extent of spying activities by the East German secret police, or Stasi, in West Germany.

As the German regional public broadcaster RBB recently reported, the Stasi ran an extensive program of stealing identities of tens of thousands of West German citizens to enable their spies to operate freely in the West.

During the Cold War, West Berlin existed as an enclave in the middle of communist East Germany. If West Germans wanted to travel to and from Berlin by land, their largest city, they needed to pass through East Germany to get there. At these checkpoints, the East German border police routinely copied passports—a total of 60,000 by the time the Berlin Wall fell.

While their agents were traveling with fake identities for spying in the West, the Stasi continuously monitored the rightful owners of the passports to ensure the identity theft was never detected.

This massive fraud came to light when the agency of the Federal Commissioner for the Stasi records completed the reconstruction of about a million torn-up documents, or the contents of about 500 trash bags. The reconstruction was accomplished, for the most part, through meticulous work by hand.

During its final days, the spy agency tried but only partially managed to destroy the evidence of its misdeeds of four decades, leaving around 16,000 bags of torn and shredded documents. It has taken 20 years to get through the first 500 bags.

The Ministry for State Security of communist East Germany, commonly called Stasi (German abbreviation for Staatssicherheit), is regarded as one of the most repressive secret police and intelligence agencies of the 20th century.

The communists used the Stasi as a key tool to guarantee their one-party rule—until protesting East Germans occupied its headquarters in East Berlin in early 1990 in the lead-up to reunification.

“With far-reaching powers, the Stasi systematically controlled mail, eavesdropped on citizens critical of the regime, invaded their homes secretly, intimidated dissenters, and disintegrated opposition groups,” as the Federal Commissioner for the Stasi records put it.

The Stasi ran an extensive network of informants who spied on their fellow citizens to help create files on 6 million East Germans, a third of the population.

In order to penetrate all sectors of society, the Stasi recruited a vast number of informants, so-called unofficial employees (inoffizielle Mitarbeiter), abbreviated as IMs. In 1988, there were 189,000 active IMs in East Germany, roughly 1.13 percent of the population. Behaving as ordinary citizens, they spied on their colleagues, friends, and spouses.

Operations in the West

The Stasi was not only active behind the iron curtain, but also in West Germany, which the communist regime regarded as a class enemy.

In addition to planting agents in the West, the Stasi also hired informants there.

The former seat of government in Bonn was naturally a prime area of operation for the secret service. Records show that more than 110 West German citizens in the small city on the Rhine River alone worked as informants.

Best-known is the case of Gunther Guillaume, a sleeper agent who worked as a senior aide to Chancellor Willy Brandt until he was exposed in 1974. The scandal led to Brandt’s downfall.

The Stasi also extensively spied on critics of the communist regime in the West, like dissident Roland Jahn, today the Federal Commissioner of the Stasi records.

After being forcefully expatriated from the East, he helped smuggle cameras and other equipment into East Berlin to aid the opposition there. The Stasi kept close tabs on him in an effort to prepare a kidnapping and possibly murder.

“It is scary … even in West Berlin how up close they were on you. … Every moment they had the chance to destroy your life,” Jahn said in a 2006 documentary made by the Federal Agency for Civic Education.

To recruit IMs, the Stasi especially targeted secretaries who worked in the federal ministries and other key institutions in West Germany—and quite successfully. A total of 58 secretaries were exposed during the Cold War, and until the fall of the communist regime in 1989, the Stasi always had an active secretary-IM in the chancellery, the main seat of power of West Germany.

The Stasi saw secretaries as valuable since they had direct access to sensitive information and usually stayed on the job even when their boss changed.

One common strategy to win secretaries as informants was to use East German agents, sometimes called Romeos, to draw them into a trusting relationship, including even fake marriages.

“It has been proven that the development of close friendships and love relationships was and is a stable and successful basis to work with the IM secretaries,” an internal Stasi document states.

In total, for their spy activity, the Stasi successfully recruited about 3,000 IMs in West Germany.