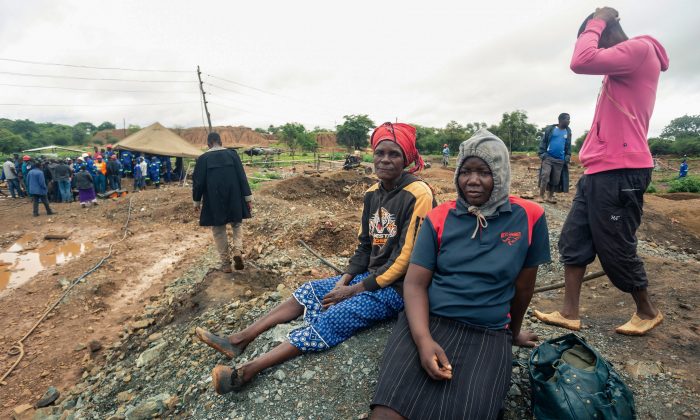 Relatives of deceased artisanal miners sit during an ongoing rescue and recovery operation at the flooded Cricket gold mine near Kadoma, Zimbabwe, on Feb. 17, 2019. (Jekesai Njikizana/AFP/Getty Images)
Africa

HARARE, Zimbabwe—“He looked at me and smiled,” says Ronika Tafireyi, after seeing her husband Thinkmore Madimutse being taken to a nearby tent by a rescue team after he was saved from the Battlefields mine disaster.

Madimutse was the first of eight survivors to be rescued from the mine in Zimbabwe—with 24 bodies so far recovered—after heavy rains flooded and trapped illegal miners in Kadoma, 90 miles west of the country’s capital Harare, on the night of Feb. 12. Authorities said they had been unable to initiate rescue operations until Feb. 16 because of continued rain.

The 33-year-old Tafireyi was short of words when she saw her husband being ferried to the tent before being taken to the hospital. “I am so excited and don’t know what to say,” Tafirei said.

Tafirei, a cook at the mine, said her husband was reluctant to go underground at the mine that night but eventually did. She said she woke up to a heavy downpour outside their home, only to hear later on from a colleague who was at the site that the situation was bad, and the chances of survival of those who had been underground were slim to none.

“From the news I received from a colleague coming from the site, things were so bad that he said it was impossible to even think anyone was going to survive,” Tafirei said.

Madimutse, who was underwater except for his head when he was rescued, was covered in mud when he was brought out of the mine shaft.

“The rains flooded the shaft where I was, but, fortunately, I managed to find a place where I stood and that helped me to remain alive, although I could see other miners falling and dying,” said Madimutse.

However, luck wasn’t with Libongani Zimbeva, who stays at the mine compound, as she lost three relatives who were also trapped underground.

“I have been waiting here patiently to identify bodies of our relatives,” Zimbeva said.

The government said as many as 70 gold miners may have been trapped after a dam wall is believed to have collapsed, resulting in flood waters pouring into nearby mining shafts and tunnels.

The rescue team has since stopped its operations because of continued rainfall. That has left concerned family members and other artisanal miners camped at the mining site waiting impatiently for any news.

Winstone Chitando, minister of Mines and Mineral Development, said the challenge is that rescuers need to drain the shafts to recover the remaining bodies, even as rain continues falling.

Meanwhile, the government has been accused of being slow to take action, and is being blamed for not having preventative measures in place.

“We need urgently as a government to come up with a very clear position to ensure that we don’t have a repeat of this,” Chitando said. “Eventually, we would want all mining operations to be safe.”

He added that the country’s Environmental Management Agency had found issues two weeks earlier at the site that needed to be addressed, but the corrections weren’t enforced in time.

The area, rich in gold deposits, is frequented by illegal miners dubbed “makorokoza,” who operate without regulation. However, due to a high unemployment rate, the country has a record of more than 500,000 artisanal miners who mine the highest volume of gold in the country.

Speaking to journalists at the site, Nduna said that some of the proceeds received from small miners by government should be channeled toward creating safety nets and protecting small-scale miners from such accidents.

“It is incumbent upon the government to get the same monies coming from the small-scale miners to create safety nets, so that they can continue to produce as they have always been,” he said.

More than 250 families make a living from each shaft at Battlefields, said Nduna, adding that artisanal mining should be regulated and recognized.

As for Tafireyi, she hopes her husband will never venture into any mining activities again, and, fearing that the next time he won’t survive, hopes he finds another means to make a living.