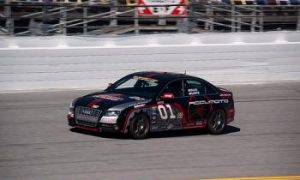 APR Motorsport Optimistic After the Fresh From Florida 200
0
World

The trapped miners in Chile are coping well with their dilemma, according to a new YouTube video.

A camera was sent down the narrow drilled shaft, and according to the Time News Feed, they sang the national anthem and showed how they have organized the shelter where they are surviving about 600 meters below ground.

“This is where we entertain ourselves, where we play cards,” said a miner, showing a table where others were laying out dominoes.

There was also a first aid cabinet, and mats near a wall. “We plan, we have assemblies here every day so that all the decisions we make are based on the thoughts of all 33," the man told the camera, according to BBC News.

The rest of the miners were waving at the camera. Since they were trapped by a massive rockfall 22 days ago, the men have grown beards and are shirtless to keep cool in the hot shelter. It is around 85 degrees Fahrenheit down there, according to BBC News.

It is estimated the miners have lost around 18-22 pounds each, after rationing their supplies so the food meant to last for three days kept them alive for 17.

The miners were sent drinks, food, and anti-depressants through the drilling shaft. They also got an exercise program and told to keep distinguishing between day and night, according to BBC News.

The miners took the news relatively well that it could take four months to rescue them. But, "we expect that after the initial euphoria of being found, we will likely see a period of depression and anguish," said the Chilean health minister.

{etRelate 41659, 41444}Others believe that it is odd that they are sending antidepressants at such an early stage.

Psychologists are carefully monitoring what the miners’ families tell the men, so that the miners remain psychologically healthy.