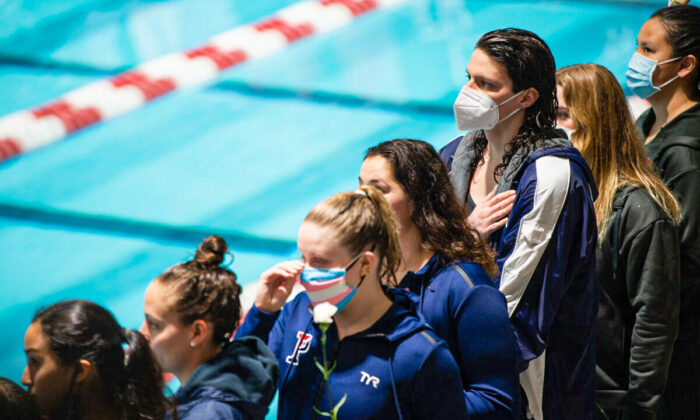 University of Pennsylvania transgender swimmer Lia Thomas stands during the playing of the National Anthem at the 2022 Ivy League Championships at Blodgett Pool in Cambridge, Mass., on Feb. 19, 2022. (Kathryn Riley/Getty Images)
UK

Most Britons believe transwomen should be kept out of female-only sports, a report suggested.

British think tank More in Common on Thursday published a report on the public opinion in Britain on gender identity, which involved a series of polling of more than 5,000 people and 20 focus groups in total.

The report suggested only two percent of Britons consider trans issues a top concern, the least among 16 options.

A majority opposed transwomen in female sports, with many considering it a “red line.”

Almost three in five (57 percent) of 3,140 respondents said a trans woman should not be allowed to take part in women’s sporting events, while 19 percent said they should be allowed. A quarter of the respondents didn’t have an answer.

The younger a respondent was, the more he or she was likely to support transwomen in women’s sports.

Meanwhile, a higher percentage of men (63 percent) were opposed to the idea than women (51 percent).

The report said the opposition to transwomen in female sports was “not for any ideological or philosophical reason, but a simple instinct for fairness.”

“The fact that men have physical advantages over women means that for very many people the inclusion of trans women in women-only sports is not fair and will lead to an uneven competition, and in some cases may not be safe,” it reads.

The report added that participation in sports is the most contentious area of the debate, but people still “strive for fairness and try and reach for solutions such as events trans people can compete in or mixed-sex competitions.”

In relation to transwomen in public toilets and changing rooms, public opinions were different depending on whether a transwoman has gone through “gender reassignment surgery.”

Around 29 percent of the survey respondents said a transwoman who has not gone through surgery should be allowed to use women’s toilets, while 42 percent said they shouldn’t.

The figures are similar for changing rooms.

The survey defined “gender reassignment surgery” as “surgery by which a transgender person’s physical attributes are altered to match the gender they identify with (e.g. breast and genital surgery).”

Facial surgeries to make a transgender person more feminine or masculine are also commonly called “gender reassignment surgery” although they are not routinely available on the NHS.

For the appropriate age to take “cross-sex hormones, defined as “hormones given to permanently change someone’s physical appearance to be more consistent with their gender identity,” the percentage of people agreeing to the treatment for under-18s increased to 31 percent, while 37 percent said they should be at least 18. Ten percent of the respondents said they should never be allowed.

According to the NHS, teenagers who have taken Hormone blockers for at least a year can access cross-sex hormones when they turn 16.

In relation to Hormone blockers, which the question described as something “temporarily but not permanently delay changes associated with puberty,” 35 percent said children could be given the treatment, while 27 percent said only adults can take them. Thirteen percent said they should never be allowed.

NHS said its Gender Identity Development Service advised that puberty blockers “is a physically reversible treatment if stopped.” It also said, “little is known about the long-term side effects of hormone or puberty blockers in children with gender dysphoria.”

“It’s also not known whether hormone blockers affect the development of the teenage brain or children’s bones. Side effects may also include hot flushes, fatigue, and mood alterations,” the NHS website states.