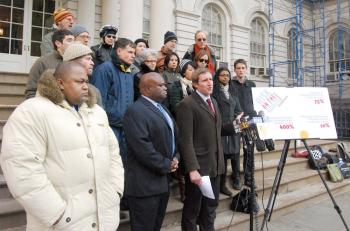 Catherine Yang
View profile
Follow
biggersmaller
Print
NEW YORK—Transportation Alternatives, a group whose mission is to reclaim New York City’s streets from the automobile and advocate bicycling, walking, and public transit, gathered on the steps of City Hall to call for tougher penalties against drivers with suspended licenses on Sunday, Dec. 6. Drivers with suspended licenses killed three people in the past week.

“What kind of sick system encourages dangerous drivers to get back behind the wheel again and again, only to give them a slap on the wrist when they inevitably kill or injure others?” asked Paul Steely White, executive director of Transportation Alternatives. “New York needs stronger laws and enforcement to keep the most dangerous drivers from taking lives.”
White said Transportation Alternatives had two actions for the state legislature and one for Mayor Bloomberg and Police Commissioner Kelly.

“If a driver is found to be so reckless that his license is to be suspended that driver’s vehicle must be impounded. Right now drivers with suspended licenses are allowed to keep their vehicles. Other states are wising up and revoking vehicles and impounding vehicles, otherwise making it impossible for drivers with demonstrated disregard of the law to get back behind the wheel,” White said.

White says in other states it has reduced the crash rates by 35 percent.

The second reform suggested was that the New York state Legislature pass Assembly Bill, introduced by Assemblyman Joseph R. Lentol, which would charge any driver who has committed two or more dangerous moving violations within 18 months of each other with a felony.

The third was to create an Office of Road Safety at City Hall to bring new attention to the problem.

“Mayor Bloomberg, hear us. Police Commissioner Kelly, hear us. You must do more to prevent drivers from getting behind the wheel if their license is suspended,” White continued. “This has to do with better enforcement overall. We all know drivers are breaking the law daily in New York City. We did a study last year finding that 37 percent of drivers are disobeying the speed limit; you stand on any street corner and see drivers failing to yield to pedestrians, drivers who are not following traffic laws, and the NYPD has allowed this problem to get out of control.

The family of the Sabados could not make it, but Sonya Powell’s fiancé, David Shephard, came to support the reforms.

“Sonya was a kind and loving person who touched the lives of thousands of people. She would have wanted any legislative action possible to ensure that this type of tragedy doesn’t happen to any other family,” he said.