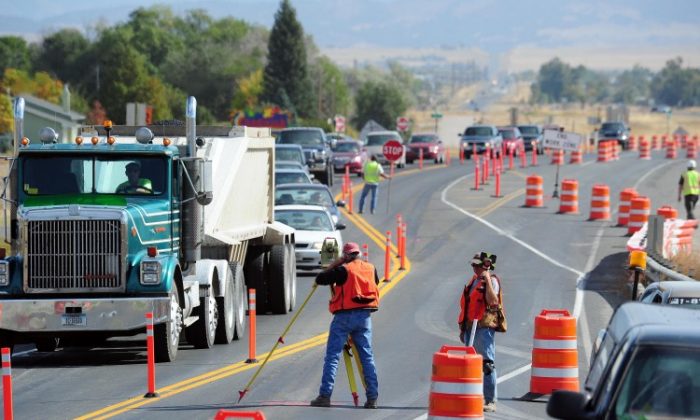 Construction workers working on a new interchange on I-15 in Helena, Montana, on September 30, 2011 (Eliza Wiley/ Independent Record)
US

Legislators have been racing to forward a transportation re-authorization bill, touted as a vital source of jobs and economic growth. The Senate Finance Committee passed the bipartisan Highway Investment, Job Creation, and Economic Growth Act of 2012, (H.R. 3864) by a vote of 17 to 6 on Tuesday, with one senator present.

According to the Federal Highway Administration, with every billion dollars spent on infrastructure, 35,000 jobs are created and sustained. The previous highway bill of 2005 raised 2.3 billion for Montana construction projects, creating 18,000 jobs.

H.R. 3864, forwarded by committee Chairman Max Baucus (D-Mont.), will raise the budget to $10.5 billion through a 2012 Highway Trust Fund, according to the Senate Committee on Finance’s (USSCF) press release. Infrastructure jobs will not only be created in Montana, but throughout the United States. “With more than $10 billion of investments made, this bill could create or sustain 350,000 jobs.”

According to the Joint Committee on Taxation, this increased funding will not affect the deficit. The “total of extension of taxes and trust fund provisions will have no revenue affect.”

The Highway Trust Fund pays for jobs in interstate highway maintenance, air quality improvement, and funds infrastructure projects on a regional and national level, according to USSCF.

Sandi Luckey, communications director of the American Federation of Labor and Congress of Industrial Organizations (AFL-CIO), said unemployment is a big issue in Montana. The bill “would be a huge deal for a lot of workers.”

“Our veterans’ unemployment rate is above 20 percent,” Luckey said. “This will really benefit the veterans who are looking for work.”

“With all the distractions in Congress right now, Montana workers are very thankful that Sen. Baucus is focused on the creation of jobs,” said Al Ekblad, executive secretary of the Montana State AFL-CIO. “It is encouraging to see the Senate act in a bipartisan manner on legislation that will result in meeting the real needs of real people.”

According to the legislation, cutting earmarks is a major change. Individual states will choose which projects to fund.

Funds from previous years have been wasted through “bloated spending” on “landscaping scenic beautification,” said Alison Acosta Fraser, director of Economic Policy Studies at The Heritage Foundation in her article on its website. The aesthetic projects contributed to the $35 billion bailout the previous transportation bill needed in 2008.

Some 80 percent of highway trust fund was paid by federal transit programs. The remainder was paid by the general fund of the U.S. Treasury, according to the Congressional Research Service.

“Because infrastructure spending has consistently outpaced Highway Trust Fund revenues, we have been propping up the Trust Fund with deficit-financed transfers from the General Fund,” said Dave Camp (R-Mich.), chairman of the chief tax-writing committee in the House of Representatives.

According to Camp, H.R. 3864 will fix the infrastructure budget problem.

“The bill before us today will provide stable funding for these projects for at least the next five years—without raising a dollar in new or higher taxes or adding a penny to the deficit,” Camp said.

Six separate excise taxes are imposed to finance the Federal Highway Trust Fund, derived from the taxes on motor fuels, according to the joint committee on taxation.

The bill has no new excise taxes; only current excise taxes are extended at present levels.

One may wonder how it is possible to increase funding without deficit spending or tax hikes. A part of the solution lies in Individual Retirement Accounts (IRAs).

H.R. 3864 has changed the way inheritors receive retirement funds from the deceased. Money will now be withdrawn and taxed by “the anticipated lifespan of the person inheriting the account,” according to an article from The Heritage Foundation.

The Heritage Foundation uses the example of grandparents, leaving their funds for a five-year-old grandchild’s future college tuition. The inherited IRA would now be taxed over the lifetime of the grandson. Additionally, funding must be withdrawn and taxed within five years.

David John, senior research fellow in Retirement Security at Heritage, dislikes the idea. “No matter how smart junior is he won’t be ready for college at the ripe old age of 10.” By the time the grandchild goes to college, much of his account will be taxed away.

“So much for the grandparents’ dream of financing junior’s college,” he said. “Tax policy should be structured to encourage savings and investment transfers between generations, but this proposal would punish both.”