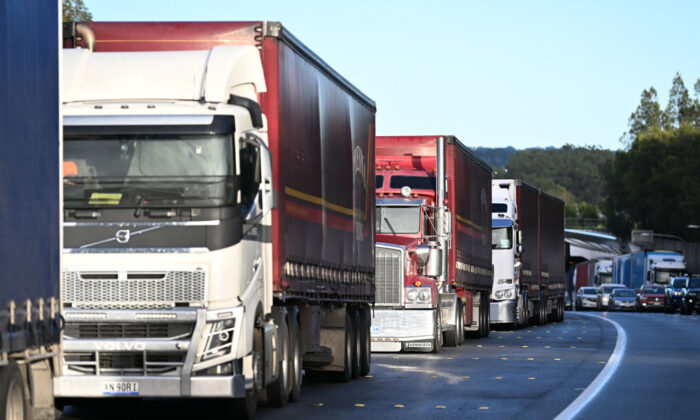 Trucks are parked on the side of the closed M1 Pacific Motorway in Tweed Heads, Australia, on March 1, 2022. (Dan Peled/Getty Images)
Australia

Transport Workers Call on Australian Government to Listen to Their Issues

Australian transport workers are calling for the right to participate in talks with the federal government and other third parties to maintain and improve the conditions of the country’s supply chains.

Unions said that transport workers’ voices had not been included in the federal government’s response to the flood disaster in Queensland and New South Wales and the adverse effects emerging from the delivery process.

Frank Black, who has been a truck driver for 35 years, said transport workers were doing all they could to help the community in difficult situations.

However, the recent flooding caused Black to resort to a back route through New England to complete a trip from Sydney to Brisbane, costing him more time and fuel.

“On those back roads, you can’t just pull off anywhere because the sides of the roads are so saturated you don’t want to risk getting bogged down,” he told AAP.

“Rest stops are pretty woeful at the best of times, but on back roads, it’s essentially just a clearing where everyone pulls in if there’s space.”

Contractors like Black, who often incur losses from clients not willing to pay more for a job, are now suffering from rising fuel prices.

He said more regulation would be helpful, but noted that the government often created more difficulties for transport workers instead of assisting them to do their jobs.

“No one can stop the rain. We understand that it’s no one’s fault, but try to make our lives easier by listening to what transport workers are going through,” he said.

According to a spokesperson for Deputy Prime Minister Barnaby Joyce, the Australian government was working with its international partners, jurisdictions and the transportation industry to ensure the flow of goods continues.

“Supply chain disruptions are being driven by a combination of factors including higher demand for imported goods and terminal closures due to COVID-19 outbreaks,” the spokesperson said.

In February, the Retail Supply Chain Alliance, which was constituted of three unions, put forward a set of supply chain safety principles covering three main measures: free rapid tests for transport workers, a government commitment to regulating the gig economy in the transportation industry, and a standing supply chain committee.

In the meantime, the Australian government is in its third year of implementing a national freight and supply chain strategy that focuses on improving freight performance in the country.

One critical area of the strategy is to boost supply chain efficiency via setting up a fit-for-purpose regulatory environment as well as providing support for a skilled and adaptable labour force.

“Workers need good, secure conditions, free rapid tests to prepare for the next variant and a say over policy changes that directly affect their work and their safety,” he said.