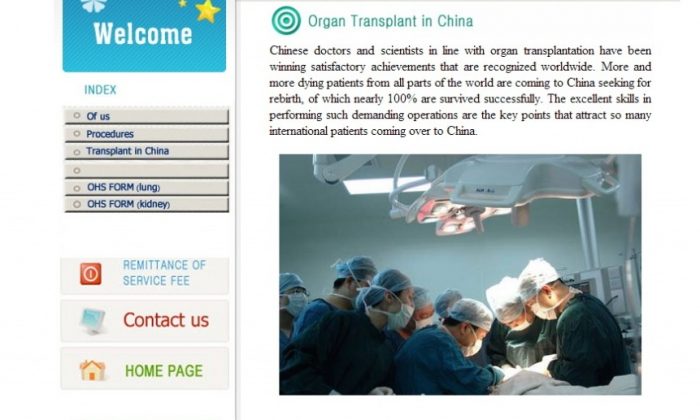 Doctors are pictured performing surgery on the website in a screenshot from cntransplant.com, which advertises organs for international recipients, in contravention of Chinese commitments to the global medical community. The website was taken down recently. (Epoch Times)
China

Until some point in May it was possible to go to the unassumingly titled cntransplant.com website and, then and there, place a phone call to arrange a transplant organ from a hospital in Tianjin, China.

“Medinet Healthcare Center. … We are the fruits of one tree, leaves of one branch,” the site once beckoned.

“We … are here to assist the patients in getting a kidney, liver or heart transplantation in China.” Its hospitals, the site said, operated with all appropriate licenses, and “are surely where the dying patients reborn.”

Patients, known as “transplant tourists,” would then fly to China to get their new organs and emerge “reborn.”

Organs of this sort in China invariably come from executed prisoners—though the type of prisoner is disputed. China is in the shaky beginning stages of attempting to set up a voluntary organ donation system, to exist alongside the harvesting of organs from prisoners.

Official numbers indicate that there were roughly 1,000 voluntary organ donors in 2013—while an estimated 300,000 Chinese patients need an organ. Global customers can be expected to pay more, however.

The existence of the cntransplant.com website flew in the face of public claims by Chinese officials that they were no longer allowing organs transplants for foreigners. The precise date that the website disappeared from the Internet is unclear, but it appears to have taken place at some point in May.

“Hospitals and doctors that carry out private transplantation transactions with foreigners will have their credentials for organ transplantion revoked,” Huang Jiefu, the former vice minister for health and the de facto top transplant official in China, was quoted saying in the Chinese press.

The Transplantation Society, an international medical group, has sought to work cooperatively with Chinese authorities for years, in particular by attempting to devise ways to prevent organ harvesting from executed prisoners.

In an unusually stern letter to the top Chinese leadership, The Transplantation Society specifically referred to the cntransplant.com website as an example of China’s failure to live up to its commitments.

“The Tianjin website … continues to recruit international patients who are seeking organ transplants,” the letter said. “The fact that foreign patients are still undergoing transplantation in China suggests that some hospitals are boldly and irresponsibly violating Chinese government regulations, thereby rendering the law a mere ‘paper tiger.’ These centers are both jeopardizing the public trust at home and tarnishing China’s reputation on the international stage.”

David Matas, a Canadian human rights attorney, in a recent talk called it “an unabashed pitch for transplant tourism.”

The removal of the website seems to show that officials are attempting to make sure that there are no overly obvious contradictions between public statements and actions on the ground. Though it does not mean the practice has stopped, experts said.

In March, Huang Jiefu was quoted saying that it was OK to use the organs of executed prisoners, a remarkable reversal from years of promises that the use of such organs would be phased out.

“Judicial bodies and local health ministries should establish ties, and allow death row prisoners to voluntarily donate organs and be added to the computer organ allocation system,” he said.

“There are no brakes on the system anymore,” said Ethan Gutmann, a researcher who recently completed a book on illicit organ harvesting in China. His work focuses on the use of imprisoned Falun Gong practitioners for their organs, a practice that is suspected to have led to the execution of tens of thousands of adherents.

Other research indicates that Falun Gong organs likely made their ways into transplant tourists. Two Canadians, David Kilgour, a former crown prosecutor and minister of Parliament, and David Matas in 2006 documented phone calls showing hospital staff in China boasting about the freshness of the organs—from Falun Gong practitioners—available for foreign customers.

While the closure of the website does not demonstrate that transplant tourism has stopped, it does resolve the glaring publicity issue that it posed.

“That was my favorite party trick for the last six months,” said Gutmann. “I would speak to a college audience and ask anyone who had any doubts to visit the website on their smartphones.”