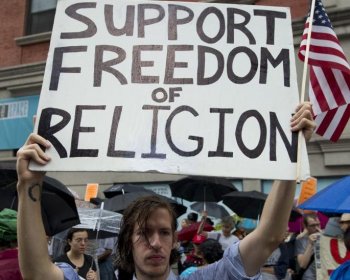 DEMONSTRATIONS: Both supporters and those opposed to the Islamic cultural center and mosque planned to be built near ground zero were present on Sunday. (Don Emmert/Getty Images)
Opinion

Evan Mantyk
biggersmaller
Print
NEW YORK—I’m a New Yorker. And in New York, there is one thing that everyone is talking about, “the ground zero mosque.”

A peace-loving Islamic group known as the Cordoba Initiative is planning to build a 13-story, $100 million facility, which includes a mosque and a community center, just a few blocks from where terrorists flew planes into the World Trade Center on 9/11. The city has green-lighted it and Mayor Michael Bloomberg has given his full support.

At first it was just local news. In Democrat-rich New York, the mosque seemed like a fact with only a few people holding up signs outside the planned area, Park 51.

Then Sarah Palin weighed in against the mosque last month. Then two weeks ago, President Obama decided to weigh in with his support, only to carefully weigh out again while his fellow Democrats have come out both in support of and against the location of the mosque.

But it doesn’t end there. The ground zero mosque is quickly becoming international news with Dutch politician Geert Wilders, known for his anti-Islam views, scheduled to appear in Manhattan at a rally against the mosque on the ninth anniversary of 9/11.

Wilders’s coming visit, regardless of what he ultimately says in his speech, highlights what will probably be the beginning of the end of the controversy.

In the United States, the criticism of the ground zero mosque has centered around how the mosque was funded and the emotional pain brought to the families of 9/11 victims, which of course is very real and understandable. Most American politicians and the more mainstream conservative media know that criticizing someone’s religion, Islam or otherwise, isn’t going to go very far in a country that was founded on religious liberty.

Whether you agree with Wilders or not, in the United States, attacking someone’s religion doesn’t work for a few reasons, other than the historical ones.

For one, America is the most diverse place on earth, so counter examples of the evils of religion and most anything else abound. My own background goes back to Catholicism, which is now plagued with child molestation cases.

Wilders’s anti-Islam views cut to the core of the issue. If you don’t have a serious and immediate problem with Islam, like he does, does it matter what is two blocks away from ground zero as long as it’s paying the bills?

From a strictly free market perspective, it shouldn’t matter. If enough people really cared that much, they should put in a higher bid for Park 51 and every other spot they feel is sacred non-Islam ground.

As it stands, the ground zero mosque controversy is inflated by American politics and is set to expire along with the milk in my refrigerator.