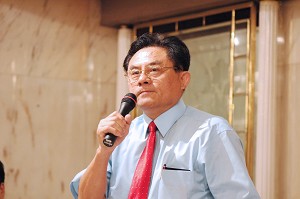 On December 5, 2007, Future China Forum announced its intention to establish a transitional mainland China government after a year of discussion among the forum founders. According to the forum's spokesperson Mr. Wu Fan, the transitional government's objective is to first end the CCP's autocracy, and then resolve the various social problems left by the CCP.

Members are currently working to establish a platform, general election, and constitution. According to Mr. Wu, the transitional has the backing of voices within the Chinese army that are hoping for a coup d'etat of the current communist regime.

Establishing a General Election and Constitution

Members are currently laying groundwork for electing a president through a general election by the Chinese citizens.

The president, vice president and ministers of the transitional government will be elected through a small-scale ballot. The candidates have taken oath to have a sense of democracy and not take post for personal interests, political power or economical profits.

Multiple versions of constitutions for the transitional mainland government and the future Chinese government are posted on Future China Forum. The final draft of the constitution will be based on a platform and established at the National Affairs Conference. In addition, there will be a set of economic and political measures for social reform.

Public discussions are also needed to discuss whether the new administration is to be a federal government or a democratic republic, as well as the design of its national flag and its official name.

The transitional government's declaration and member list will be formally publicized on January 1, 2008.

The results of the 17th National Congress of the CCP disappointed many who hoped it would launch political reforms. On the contrary, more severe persecution has been inflicted on human rights defenders, dissidents, victims of demolition, members of underground Catholic churches, and Falun Gong practitioners, as well as a comprehensive crackdown on veterans.

Voices from China's military have repeatedly encouraged and requested for the immediate establishment of a transitional government. Those soldiers claim that now is the perfect timing.

Wu said, “Afterwards, soldiers started to support us, and we want to cooperate with them to establish a transitional government that will assume power.”

After the transitional government members are elected, it will direct and take care of the political conditions left by the CCP, and make all the decisions concerning the movement.

After the transitional government establishes a platform, the bans on newspapers and parties will be uplifted so that all democratic power can play a role in the platform.