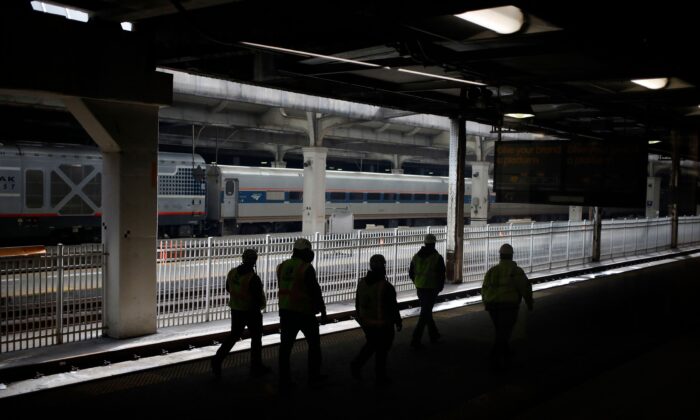 Workers walk past an Amtrak train along the platform at Chicago Union Station in Chicago on March 2, 2022. (Luke Sharrett/AFP via Getty Images)
Economy

Transit Flush With Cash After Federal Pandemic Bailout, but What Happens Next?

Data from the Federal Transit Administration sheds light on how the COVID-19 lockdown crippled public transportation in the U.S.

As passengers abandoned public transit during the lockdown, many systems were kept alive by the $69.5 billion the federal government gave transit agencies throughout the country in three relief packages.

The transit system that serves the Washington D.C. area was an example of a system that was able to continue service due to the federal bailout. It reported a 25 percent reduction in passenger miles delivered in 2020, but its operating expenses increased by 4 percent that year.

That’s because the Washington Metropolitan Area Transit Authority got taxpayer money from the federal government, which increased funding for the transit’s operating expenses by more than 400 percent, or $220 million, from 2019 to 2020.

The data comes from the Federal Transit Administration.

In March 2020, with government-imposed shutdowns across much of the country, public transit agencies were running nearly empty buses and trains.

Marc Scribner, senior transportation policy analyst at the Reason Foundation, said public transit was heavily subsidized even prior to the pandemic.

Scribner said that transit was getting a third of combined highway and transit federal funding but only providing 2.5 percent of the person trips nationwide. But the lockdown ravaged transit.

Scribner said the federal government threw more money at transit during the pandemic and once that money runs out, transit agencies will have to cut service or depend on additional federal subsidies to survive.

“Transit will undoubtedly remain a niche mode of transportation in the U.S. and will probably never account for more than 2 percent of nationwide person trips again,” he said. “It will remain important in a handful of U.S. cities, but needs to be rethought in the vast majority of the country. Running more mostly empty transit vehicles isn’t environmentally friendly, doesn’t reduce traffic congestion, and cannot enhance the employment or social opportunities of the poor.”

P.S. Sriraj, director of the Urban Transportation Center at the University of Illinois Chicago, said that public transportation ridership started falling nationally on a year-to-year basis in 2014 as a result of multiple factors, including the emergence of ride-hailing apps such as Uber and Lyft and changing office policies. Then came COVID-19.

“There was a very perceptible, very slight drop in ridership every year and the pandemic took the bottom out of that and made the ridership fall to precipitous lows,” he said. “Even without the pandemic, ridership would have slowly eroded, but the pandemic accelerated that erosion.”

Sriraj said that because of that base erosion, ridership may never return to pre-pandemic levels.

“I don’t think that ridership will ever go back to what it was,” he said. “But to what levels it will drop is the more important question.”

“If the powers that be decide that it is the only way they can sustain transit in this country, then they can very well continue it and make it law and create a new funding stream to support operations of public transportation, but that movement has not happened yet from the legislative side,” Sriraj said. “As of now, it is only a stopgap relief measure. It is set to sunset by 2025, so what after that? That’s a big question mark.”

The $69.5 billion in federal relief for public transit agencies is almost enough money to run the state of Michigan, home to about 10 million people, for a year. That’s also about enough money to buy five of the latest U.S. Navy aircraft carriers.