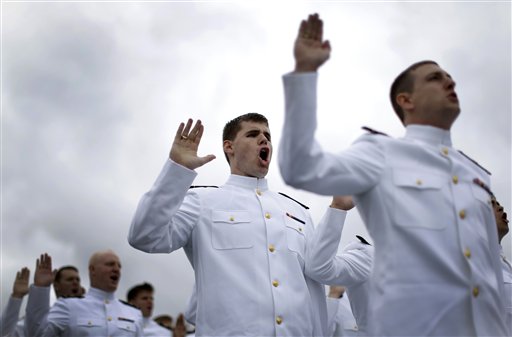 Transgender students will be barred from enrolling in the Naval Academy at the start of the 2020 school year as the Defense Department starts enforcing Pentagon’s transgender military policy.

The policy, which bars most transgender individuals from serving unless they serve as their biological sex, took effect on April 12. The Defense Department confirmed with the Capital Gazette on April 15 that the academy will implement the policy, effectively banning transgender students from enrolling in the fall 2020 school year and beyond.

A Naval Academy spokesperson confirmed the same with The Hill. The spokesperson said, “Our understanding is that the policy will go into effect for those students applying to enter the Naval Academy in 2020, beginning with the Class of 2024.”

Students who are enrolled for fall 2019 are still under the Obama administration’s policy, which allowed transgender people to serve and also covered costs incurred for hormone therapy and gender reassignment surgery.

President Donald Trump promised in 2017 to re-enforce a ban on transgender service members from the military that was lifted by his predecessor, President Barrack Obama, in 2016.

After consultation with my Generals and military experts, please be advised that the United States Government will not accept or allow……

….Transgender individuals to serve in any capacity in the U.S. Military. Our military must be focused on decisive and overwhelming…..

….victory and cannot be burdened with the tremendous medical costs and disruption that transgender in the military would entail. Thank you

On Jan. 22, the Supreme Court ruled in favor of the Trump administration and lifted the preliminary injunctions on two other cases, making it another win for President Trump.

The Defense Department signed a memo on March 12 to enforce the restrictions. The memo, signed by the No. 2 official at the Pentagon, David Norquist, will allow service secretaries to issue waivers on a case-by-case basis.

The @DeptofDefense signed a memo to enforce limitations on #transgender people serving in the #Military.

The policy will take effect April 12 and will bar most transgender individuals from serving if they require hormone treatments or transition surgery. https://t.co/jqwA9KfNRA

According to the department’s website, the ban will be exempted for transgender individuals who joined the military before the policy takes effect and for those diagnosed with gender dysphoria who do not undergo medical treatment such as hormones or surgery.

The department said the policy does not discriminate based on gender identity but enforces the military standards on all persons, whether or not they are transgender.

“Persons with a history of gender dysphoria—a serious medical condition—and who have undergone certain medical treatment for gender dysphoria, such as cross-sex hormone therapy or sex reassignment surgery, or are unwilling or unable to meet the standards associated with their biological sex, could adversely impact unit readiness and combat effectiveness. For this reason, such persons are presumptively disqualified for service without a waiver,” the department stated.

In a memo signed by Trump in 2017, he cited military focus and medical costs for reversing Obama’s policy.

“In my judgment, the previous Administration failed to identify a sufficient basis to conclude that terminating the Departments’ longstanding policy and practice would not hinder military effectiveness and lethality, disrupt unit cohesion, or tax military resources,” he said.