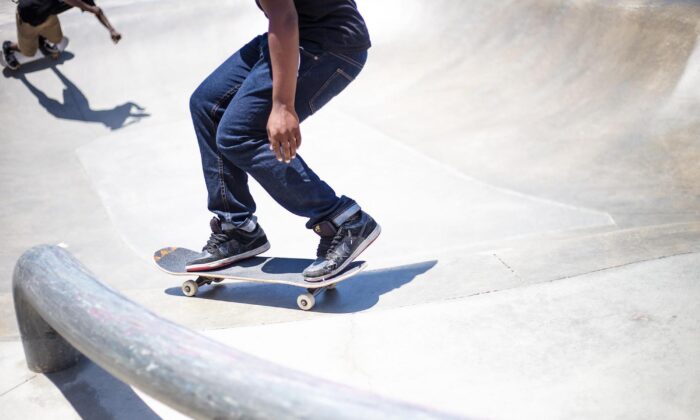 Transgender Skateboarder on Defeating Young Girls in NYC Contest: ‘I Wasn’t Going to Go Easy on Them’

A 29-year-old male-born skateboarder who sparked a social media outrage after defeating young girls to claim the championship in a women’s skateboarding contest in New York City has boasted about the win, insisting on having no physical advantage over female competitors.

“I wasn’t going to go easy on them just because they’re kids,” Tres told The Daily Mail.

Formerly known as Richard Batres, Tres served four years in the U.S. Navy and had three children with a woman before starting to take hormone treatment and identifying as a woman two years ago. Tres tried to participate in the Women’s Street USA Skateboarding National Championships but was rejected for having too much testosterone, according to The Mail.

When asked by the Daily Mail, “Do you think that you have a physical advantage?” Tres paused before answering, “I don’t… I don’t think so.”

“Look at me. I’m not buff or anything, you know, I don’t work out really; I just skateboard. And I don’t think skateboarding has anything to do with physicality, especially when you look at kids these days.”

Taylor Silverman, a female skateboarder who placed second in a Red Bull-sponsored competition and lost out on prize money because of a transgender competitor, disagrees.

“A biological man with a clear advantage won the women’s division, best trick, and also won multiple qualifiers,” she wrote in a complaint to Red Bull, noting that she has competed in “three different contests with trans women, two of which I placed second.”

“This took away the opportunity that was meant for women to place and earn money. What happened was unfair and at the time I was too uncomfortable to speak up,” she argued.

Silverman was joined by podcast show host and fellow skateboarder Tim Pool, who wrote on Twitter that biological males do have a physical advantage in skateboarding because they “have higher centers of gravity granting advantages that cannot be removed with [hormone replacement therapy].”

“That plus the Q angle differences, so it’s unfair to female athletes,” he added. The Q angle is the angle between the quadriceps muscles and the patellar tendon. Young adult women typically have greater Q angles than their male counterparts, making them more prone to knee pain and instability due to the extra stress placed on their knee joints.

Meanwhile, Catori said she isn’t “upset at all” about losing to Tres, but is concerned about how Tres is feeling.

“I’m really worried about how Ricci must be feeling. I admire her courage very much,” she said in a video posted on Instagram. “I can’t imagine how awful it must feel to see all this hate from all these people.”

The controversy around the New York City skateboarding contest comes amid a broader debate over whether it is fair for male-born athletes to compete against women and girls in competitive sports.

The issue has been gaining attention over the last few years and drew national headlines in March when male-born swimmer Lia Thomas competed as a woman and won the 500-yard freestyle national college swimming championship. A senior at the University of Pennsylvania, Thomas finished the race with a time of 4:48.25, beating out the second-place finisher, Tokyo 2020 Olympic 400-meter medley silver medalist and University of Virginia freshman Emma Weyant, by more than a second.

Last week, the international governing body of competitive swimming, FINA, released a new rule effectively banning most transgender athletes from participating in any major women’s events, including the Olympic Games.