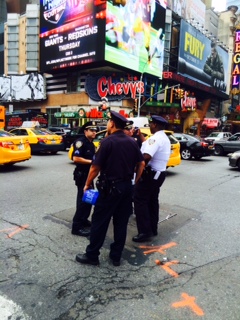 There are priceless lessons the NYPD—and every police department—can learn from the ideals of the United States Military Academy, commonly referred to as West Point.

Essentially, the mission of West Point is to educate, train, and inspire leaders of character, ethics, and moral courage.

These principles are pivotal to the values of duty, honor, and country, which are the heart of a United States Army officer.

These ideals have inspired my work at numerous West Point initiatives, including the National Conference on Ethics in America.

More recently, I have been privileged to address law enforcement officials along with Lt. Gen. Robert L. Caslen Jr., Superintendent of West Point.

One event was the inaugural New Jersey Conference: Character, Ethics, Leadership. The event at The Richard Stockton College of New Jersey was filled to capacity with law enforcement officials.

Another event was an FBI leadership retreat that included representatives from every office of the Newark Field Office.

During our presentations, character, ethics, leadership, and moral courage were highlighted by both Gen. Caslen and me as essential to the development of military and police officers.

High ethical standards are critical to all who seek to protect and serve society, both in military and police professions.

For instance, the West Point Honor Code states, “A cadet will not lie, cheat, steal, or tolerate those who do.”

Similarly an NYPD officer must also adhere to ethical principles including respect, honesty, diversity, and dedication to duty.

These principles are particularly critical to the NYPD based on contemporary issues articulated by Commissioner William J. Bratton during a recent retreat of over 800 top department executives.

In his customary transparent honesty, Bratton addressed the small percentage of NYPD officers who are “poisoning the well” and needed to be weeded out.

The heart of sound law enforcement philosophy is based on the rock-solid Nine Principles of Policing by Sir Robert Peel.

These principles are summarized by the saying “the police and the people are one” and the thought that effective policing mandates “pubic approval of police existence, actions and behavior.”

Contravening ethical behavior and detrimental to police–people collaboration was a video montage shared at the retreat that substantiated Bratton’s concerns. The video titled “What would you do?” clearly depicted unethical NYPD behavior, including the following:

There is no place for aspiring U.S. Army officers who dishonor the ethics of the West Point Honor Code. The honorable service in America’s military demands leaders of character, ethics, and moral courage.

Policing is also an honorable, admirable, and ethical profession. There is no place for any officer—poignantly articulated by Bratton—who is “so callous, so brutal, so corrupt that they feel comfortable engaging in those acts of brutality and acts of corruption without fear.”

Character, ethics, leadership, and moral courage must be the heart of all at West Point and the NYPD. These principles are essential for protecting the nation, enhancing police-public collaboration, and ultimately reawakening the nation.