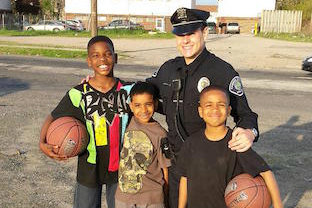 American policing is at a defining moment and the eyes of the world are upon us.

It would be naive, irresponsible, and disingenuous to portray policing in America as without issues, especially due to recent police–community division in places including Staten Island, Baltimore, Ferguson, Cleveland, and North Charleston.

But while these issues demand transparency, dialogue, and resolve, we must take time to appreciate dedicated police officers. Our police are community members, and in collaboration with law-abiding citizens, critical to security and safety.

The heroic response of police along with first responders to the Amtrak disaster is an inspiring testimony of courage, compassion, and character.

As people screamed for help from the chaotic train derailment that claimed eight lives and injured over 200 in Philadelphia on May 12, the bravery of police and first responders was inspirational.

They cut through fences in the dark of night and entered decimated train cars to assist hundreds of passengers with first-aid, evacuations, and administering tourniquets.

Steven Pissamano, the father of another Lyndhurst cop, also on the train returning from the same event stated, “I want to tell [Keane] thank you. He saved our lives and he saved many other people’s lives, disregarding his own, because he went back into that train and started helping people.”

Humbly evading praise, Officer Keane simply stated, “It’s my job, that’s what I was put on this planet to do.”

Although the derailment will be a flashpoint on America’s need for enhancing infrastructure, one issue is irrefutable, appreciation for those who protect and serve, individuals who risk their lives for us.

Although just a few years ago, Camden was considered dangerous beyond redemption according to the president, yet now it is a model of transformation due to the courage, compassion, and caring of its police.

Community policing initiatives in Camden have included doubling the size of its police force and cutting desk jobs. This allows officers to be more involved with the community, especially with students that includes basketball games, volunteering, and reading programs.

Although, the city is a work in progress and issues beyond policing including poverty, unemployment, broken families, race, drug abuse, and education need attention, community policing has had positive results including the following:

It is the defining moment for policing in America.

Changes are rapidly taking place and community policing is the heart of this transformation.

Along with numerous policing changes, the White House by executive order, will also ban local police departments from acquiring some types of military-style equipment from federal agencies. These include tracked armored vehicles, weaponized aircraft, grenade launchers, certain high-caliber weapons, bayonets, and ammunition of .50 caliber or higher.

The concern, as witnessed in Ferguson, is the potentially negative impact on police–community relations if such equipment is used without proper training, arbitrarily, or inappropriately.

In my opinion, the equipment issue needs discerning dialogue, as these are violent times. Law enforcement needs not only community policing but also every tool and unit necessary to protect themselves and society.

Also, the “Final Report of the President’s Task Force on 21st Century Policing” was released on May 18. It highlights pillars of building trust, fostering collaboration, technology-based community engagement, community policing, and leadership training, as well as officer wellness and safety.

The report is a must-read for all concerned with police–community relations, as it is filled with recommendations to make America safer.

Although these are challenging times for American policing, it is the opportunity for community policing to be the catalyst that inspires our reawakening of the nation.