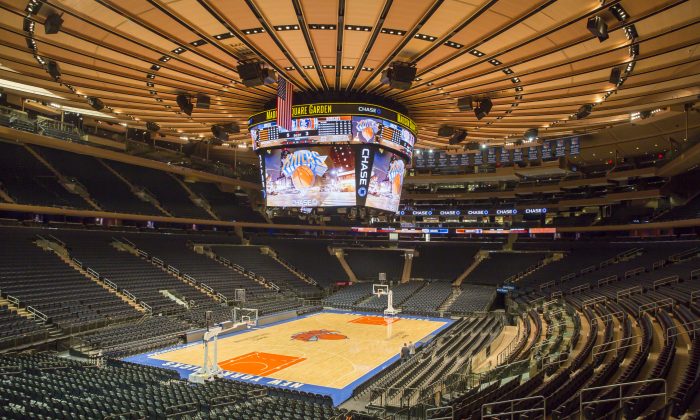 NEW YORK—Walt Frazier scored the first basket for the Knicks at Madison Square Garden when it opened in 1968. Frazier went on to become a basketball legend, but despite the stardom, the pressure and jitters that came with playing at the Garden stayed.

Athletes call that feeling Gardenitis, Frazier said, adding that New Yorkers are “the most, provocative, knowledgeable, and demanding fans.”

“The pressure is on to win here,” Frazier said. “The expectations—it’s overwhelming. It’s like the Roman Coliseum.”

Demanding as New Yorkers can be, the feeling might have more to do with the architecture. Garden’s unique cement and steel roof provides the intimacy and acoustics no other arena does. For the athletes, that translates to a unique kind of pressure.

When the Garden reopens on Oct. 25, that pressure will be on, bigger than ever.

After a three-year, $1-billion, floor-to-ceiling transformation, the arena will debut with seats suspended over the court (or the rink, or the stage). All the seats in the upper bowl have also been moved 10 feet closer to the action, adding to the intimacy and the pressure that thrill both athletes and fans.

The remodeling took place during the offseasons and left almost nothing untouched: from the first row to the last, from the lobby to the locker rooms, and from the dressing rooms to the big screens. There are more amenities, restrooms, and total seats. The screens that hang from the center of the roof are five times bigger.

The bridges suspended from the roof are the most striking addition. The viewing angle is unique, lending a top-down perspective.

The bridges also contain lounges with bar stools and event space that can be rented for parties.

Spectacular as they are, the bridges aren’t flashy. The structures were designed to meld with the rest of the arena and are hard to spot from other seats. Although they hang directly in front of the highest seats in the bowl, the views are not at all obstructed and the structure blends in with the ceiling.

“The Garden told us they want something unique, something that fits into the bowl perfectly, and creates a viewing angle that people haven’t had before,” Murray Beynon, the architect for the project, said.

The very roof that give the Garden its unique quality was also used to create the bridges, all 660 tons of which are suspended from it.

Part of the original remodeling plan was to add a Madison Square Garden museum. But when the team behind the project considered what could go there, they realized that thousands of items and photos from iconic moments could be considered. The museum was scrapped. The relics of fame, instead of being sheltered in a separate area, are now on display all over the arena, for all to see.

Among the exhibits is 12-12-12. It memorializes a fundraiser for the victims of Hurricane Sandy that was held at the Garden six weeks after the city was hammered by the catastrophe. That day, the house was packed for a four-hour concert, a billion people viewed the broadcast, and $50 million was raised—two weeks before the federal government approved the aid.

That day, like a good neighbor, and like the athletes and performers who play there, the Garden came through under pressure.

On Friday, it reopens again, better than ever.

“The Garden holds a special place in people’s hearts,” Ratner said. “And I think it always will.”