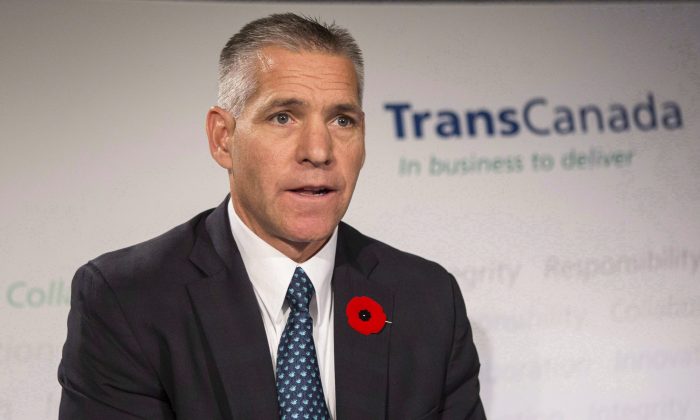 TransCanada CEO Russ Girling speaks at a news conference in Toronto on Oct. 30, 2014. Girling says he deosn’t agree with the U.S. Environmental Protection Agency’s view that the Keystone XL pipeline's role in climate change must be reconsidered in light of the steep drop in crude prices. (The Canadian Press/Chris Young)
Business & Markets

CALGARY—TransCanada Corp. is challenging the U.S. Environmental Protection Agency’s view that the Keystone XL pipeline’s role in climate change must be reconsidered in light of the steep drop in crude prices.

Earlier this month, the EPA urged the U.S. State Department to “revisit” its conclusion—drawn more than a year ago when the outlook for oil was much more bullish—that the oilsands would likely continue to be developed, with or without Keystone XL.

TransCanada, the Calgary-based company planning to build the US$8-billion conduit, wrote to the State Department on Tuesday to say it believes the EPA’s assessment is off base.

“TransCanada disagrees with any suggestion that the Department has not fully and completely assessed the environmental impacts of the proposed project,” CEO Russ Girling wrote.

“In addition, TransCanada rejects the EPA inference that at lower oil prices, the project will increase the rate of oilsands production growth and accompanying greenhouse gas emissions.”
The State Department’s approval of the project is required because the pipeline crosses the Canada-U.S. border.

Keystone XL would connect with TransCanada’s existing Keystone network, which today delivers crude to the U.S. Midwest and Gulf Coast. It would provide a more direct route to the Gulf by cutting diagonally from the Saskatchewan-Montana border to Steele City, Neb.

In its letter, the EPA said the State Department should give more weight to a “low price scenario” outlined in last year’s environmental impact statement, which said sustained low oil prices at US$65 to US$75 a barrel could make oilsands producers more sensitive to transportation costs.

The thinking goes that when prices are higher, oil moves to market regardless of Keystone XL, mainly by rail. But when oilsands margins are squeezed to the extent they have been, the fact that rail is a more expensive transportation mode matters more to oilsands producers.

“We don’t believe that any single pipeline will cause production of oil to accelerate or decelerate,” he told reporters on a conference call Wednesday, adding the cost of pipe versus rail
is not the “primary driver” for oilsands output.

“There’s many other factors that go into that decision making for producers, be it technology, oil prices, operating costs and all those kinds of things which are constantly moving.”

In his letter, Girling noted that throughout the six and a half years TransCanada has been waiting on U.S. approval for Keystone XL, crude prices have ranged from US$39 a barrel to US$110 a barrel, yet oilsands production has grown.

The U.S. crude benchmark has been around the US$50 mark for most of 2015 so far.
As for whether the EPA’s contentions will cause more delays for Keystone XL, Girling said it wouldn’t be unprecedented.

“We have basically seen this movie before where the Department of State has a desire to ensure that the record is complete.”

And if a decision on Keystone XL is pushed back once again, Girling said TransCanada will provide any information the State Department needs.

Meanwhile, the Republican-dominated House is expected to vote on a bill that will likely send the project to U.S. President Barack Obama, who has promised to use his veto power to prevent Congress from pushing through approval of the pipeline.