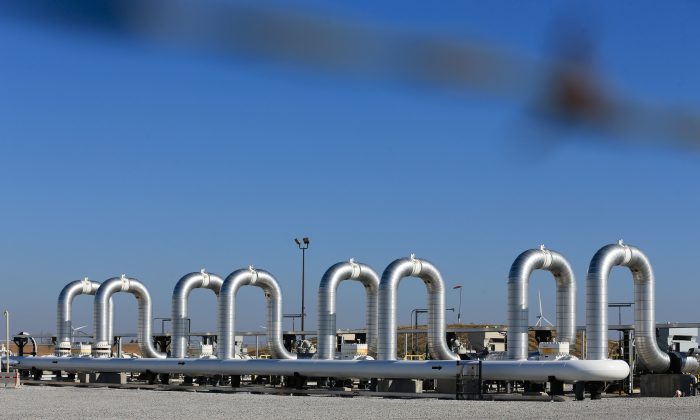 The Keystone pumping station, into which the planned Keystone XL pipeline is to connect to, is seen in Steele City, Neb., Tuesday, Nov. 3, 2015. TransCanada, the company behind the project, said Monday it had asked the State Department to suspend its review of the Canada-to-Texas pipeline, citing uncertainties about the route it would take through Nebraska. (AP Photo/Nati Harnik)
Canada

TORONTO—The head of the Canadian company behind the proposed Keystone XL pipeline denied Tuesday that political motivation drove its decision to ask the U.S. government to delay consideration of the project.

TransCanada’s request that the State Department suspend its review of the Alberta-to-Texas pipeline could delay any decision until the next U.S. president takes office in 2017, potentially leaving the fate of the controversial project in the hands of a more supportive Republican administration.

The request comes as many anticipate President Barack Obama will reject the project, which has been a flashpoint in the debate over climate change and source of friction between the United States and Canada. Hillary Rodham Clinton, the front-runner for the 2016 Democratic presidential nomination, opposes the pipeline but the Republican candidates support it.

“It seems unusual to me that somehow it should be paused yet again,” Earnest said.

TransCanada chief executive Russ Girling denied that the request has anything to do with an anticipated rejection of the pipeline. The company said a suspension of the review would be appropriate while it works to secure approval of its preferred route through Nebraska in the face of legal challenges. TransCanada anticipated it would take seven to 12 months to get approval from Nebraska authorities.

“We have worked very hard for seven years try to keep our head down and work our way through every twist and turn and every additional request to the regulatory process and we are intent on continuing to do that until you get the regulatory approval and we have solved people’s issues through that process,” Girling said on a conference call with analysts and media.

The Keystone XL project has undergone repeated federal and state reviews since TransCanada announced the project in 2008. The 1,179-mile (1,900-kilometer) pipeline would run from Canada through Montana, South Dakota and Nebraska, where it would connect with existing pipelines to carry more than 800,000 barrels of crude oil a day from the Alberta oil sands to refineries along the Texas Gulf Coast.

Opponents say the development of Alberta’s oil sands require huge amounts of energy and water and increases greenhouse gas emissions. They warn pipeline leaks could potentially pollute underground aquifers that are a critical source of water for farmers in the Great Plains. Supporters maintain it will create jobs and reduce U.S. reliance on Middle Eastern oil. They argue that pipelines are a safer method of transporting oil than trains, pointing to recent derailments.

The State Department is not obligated to grant TransCanada’s request to halt the review, which is required as part of the application process because the $8 billion pipeline would cross an international border.

“The chance of approval is slim,” said Wenran Jiang, an energy expert and former special adviser to Alberta’s Department of Energy. “They are looking to avoid a rejection and they are not betting on the slim possibility of being approved. They are waiting for the next administration so it’s a bit of a delay but a better chance.”

Delays in approving the pipeline have caused friction between the Obama administration and the government of Canada’s outgoing conservative prime minister, Stephen Harper.

Canada, which relies on the U.S. for 97 percent of its energy exports, needs infrastructure in place to export its growing oil sands production.

The recent election of Liberal Prime Minister Justin Trudeau could change the contours the Keystone debate. Trudeau, who will be sworn in Wednesday, supports Keystone but insists relations between the two countries should not hinge on it.

Trudeau might also persuade a Democratic-led White House to approve the project if Canada is aggressive about reducing greenhouse gas emissions, said David Goldwyn, a former energy official in the Obama administration.

“The prospects for KXL approval by the U.S. had been dim, but the ascension of the new Trudeau government, with its serious commitment to meeting greenhouse gas reduction targets matching those of the US, could change the dynamic,” Goldwyn said. “If Canada is able to meet its national targets by offsetting emissions elsewhere in the economy the U.S. perspective on the salience of the pipeline could change. The Harper government was never credible on greenhouse gas reductions; this government could be very different.”

Despite a sharp decline in oil prices, Girling said Keystone and other proposed pipelines remain viable. He said production has grown rapidly in Alberta and in the Bakken region since the company first applied for the permit in 2008. He said output is already high enough to make Keystone viable and added that pipelines are a cheaper option than moving oil by rail.

“This project remains very much in demand by our customers,” Girling said. “Oil prices will not stay low forever but even if you think of when we made this application in 2008, the price of oil was $40 per barrel. The price of oil is $40 per oil again today.”