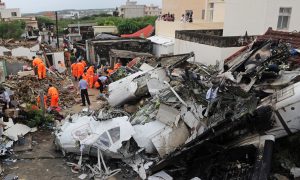 What Other Crashes Has TransAsia Suffered in 20 Years?
0
Share Now
TelegramFacebookTweetEmailTellMeWeReddit
Copy Link

The mangled fuselage of a TransAsia Airways commercial plane is dragged to the river bank after it crashed in Taipei, Taiwan. The Taiwanese commercial flight with 58 people aboard clipped a bridge shortly after takeoff and crashed into a river in the island's capital of Taipei on Wednesday morning, Feb. 4, 2015. (AP Photo)
Asia & Pacific

In an uncommon move, Taiwan authorities have already released a printout of part of the flight data from TransAsia GE23 that crashed minutes after takeoff in Taipei on Wednesday.  The data seems to reveal that the pilots inexplicably shut down the good engine after reporting a “flame-out” in the other engine in a Mayday call to air traffic control.

The data is in the form of a series of graphs that shows the state of the engines against a timeline and altitude.

At 45 seconds into the flight, the temperature for the left engine dropped sending the engine into autofeather mode. Autofeathering reduces the drag on the propellers so a plane can glide longer when a engine fails.

The aircraft continued to climb at this point on the power of the right engine. That’s when the mistake was made.

Looking at the flight data, David Learmount, a former U.K. Air Force pilot and aviation safety expert, analyzed the situation in a post on Flightglobal.com and came to the conclusion that the pilots made a mistake:

“[D]uring that short period the crew allowed the power lever (throttle) of the failed No 2 engine to stay where it was, and started slowly pulling back the power lever of engine No 1 (the working left engine). When it had been reduced almost to idle setting, the fuel was shut off and the right engine also feathered. Just before they shut off fuel to No 1, they advanced the throttle of the failed No 2 engine as far as they could, as if it would provide them with additional power.

At that point there would have been a total absence of engine and propeller noise, but lots of alarms going off as systems lost their electrical power. From that time onward the crew had, as it turns out, 1min 15s of gliding time before hitting the surface.”

According to Learmount, the pilots made a mistake. There’s no reason why they should have followed the shutdown drill for a working engine. He wonders why the investigators released the raw data so quickly, which is unusual in accident situations.

The investigators knew the information about this critical mistake would soon have to be released.
— David Learmount, Aviation safety expert

“The investigators knew the information about this critical mistake would soon have to be released, and it looks as if they believed it would be better to publish the cold data that shows what occurred, rather than to make a statement–without releasing the data–that could be interpreted as a premature judgement about the human factors of this case.

What’s not clear yet is what caused the left engine to fail in the first place.

The Feb. 4 crash into Keelung River killed at least 35 of the 58 people on board. Eight people are still considered missing and another 15 were rescued with injuries. Both pilots died in the crash.