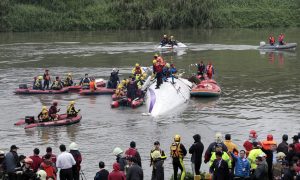 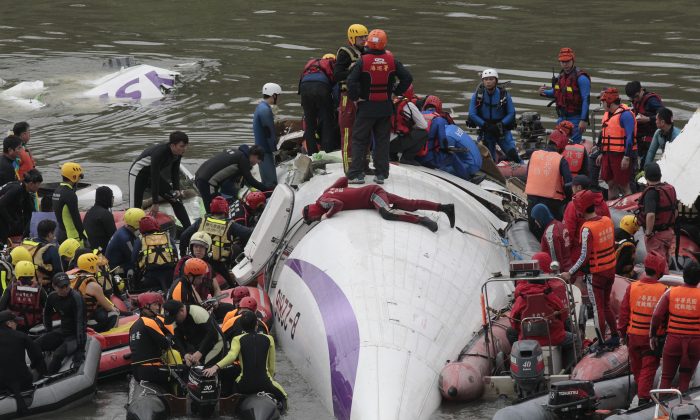 Emergency personnel try to extract passengers from a commercial plane after it crashed in Taipei, Taiwan, Wednesday, Feb. 4, 2015. The Taiwanese commercial flight with 58 people aboard clipped a bridge shortly after takeoff and crashed into a river in the island's capital on Wednesday morning. (AP/Wally Santana)
Asia & Pacific

A TransAsia Airways plane with 53 people on board crashed in a river in Taipei, Taiwan, on Wednesday (local time) shortly after takeoff, killing at least 19 people.

The small aircraft, which was flying from Taipei to Kinmen, clipped a highway bridge about 3 minutes after takeoff sending the plane plunging into the urban river. Fifteen people were rescued and another 24 are missing, officials said.

UPDATE: Officials say 23 are confirmed dead and 20 more are missing.

ATC recordings show that the crew made a mayday call, reporting an engine flame out (23:25 – in Mandarin).

“Actually this aircraft in the accident was the newest model. It hadn’t been used for even a year, TransAsia director Peter Chen told a news conference.

A TransAsia Airways ATR72-600, B22816, ditched in Keelung River after takeoff from Taipei Song Shan on 04FEB15 pic.twitter.com/QSfGGhbhvL

WHAT. RT @brianstelter: Have you ever seen a more incredible image from a dashcam? (This is #TransAsia flight #GE235) pic.twitter.com/yHZdoUoItA

The last time an TransAsia Airways had a fatal accident was six months ago when another TransAsia ATR-72, flight 222, crashed killing 47 of the 58 people on board. And in 2002, an ATR 72-200 cargo plane from Taipei to Macau crashed because of ice conditions. Both pilots were killed.