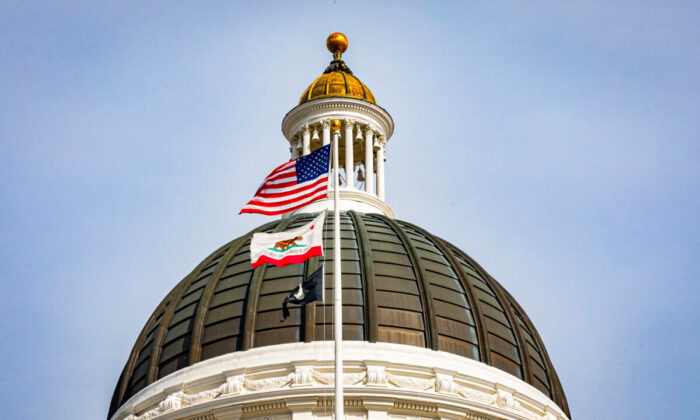 Legislation that would make California a sanctuary state for transgender youth and their parents fleeing states where laws prohibit “gender-affirming health care” for minors continues to move through the Legislature despite strong criticism from opponents.

Senate Bill 107 passed the Assembly Appropriations Committee on Aug. 3 with an 11–4 vote along party lines. It now moves to the State Assembly floor.

A San Francisco Bay-area mother, whose daughter once believed she was transgender but changed her mind, told the committee that she’ll never forgive herself for allowing the girl to take puberty blockers.

“At the insistence of the medical community, we regrettably placed our 12-year-old gender-confused daughter on puberty blockers. We were not told of long-term effects,” said the mom, who used the pseudonym Kiley Chang for fear of retaliation.

In written testimony read during the committee meeting, Chang said she left the Democratic Party because of gender ideology.

“Medical providers used the threat of suicide to pressure us to accept our daughter as our son instead of the promised relief and stability. With both social and medical transition, our daughter’s mental health grew worse,” the letter reads.

Chang said her daughter became “more suicidal.” She was cutting herself, and her sleep and eating habits were abnormal to the point where every day was “crisis management” until she took the girl out of public school, which she said was “pushing this gender identity.”

Her daughter began to detransition after she sought the help of an out-of-state psychiatrist “who with family, love and compassion brought our daughter back,” according to the letter.

Authorities from child protective services (CPS) investigated her after her daughter changed her mind, Chang said. While she retained custody of her daughter, at least one other California mother lost custody of her child for not supporting medical transition.

“Imagine losing your child because you believe in biological facts,” Chang said. “My daughter is now happy in her female body, but I will never forgive myself for subjecting my child to what may result in long-term health problems. Only time will tell what puberty blockers did.”

Other parents of children with gender dysphoria have told The Epoch Times that CPS has investigated them for opposing transgender ideology or refusing to use transgender pronouns.

State Sen. Scott Wiener, a Democrat who authored SB 107, described it as a “trans state of refuge” measure to protect the parents of trans youth who are facing “criminalization” and prosecution for allowing their kids to receive “gender-affirming health care” in other states.

If the legislation is passed and signed into law, Wiener said that California “will do whatever it can” to keep them safe from “despicable laws,” such as those passed in Texas and Alabama.

In Alabama, parents of trans youth and the doctors who provide them with gender-affirming care can be charged with child abuse and face up to 10 years in prison, while the children can be placed in foster care.

“California has, of course, taken the lead and is taking necessary steps to protect access,” Robson said during the meeting. “Our health centers are committed to providing accessible, inclusive gender-affirming care to those who seek it. SB 107 ensures that we can continue to do so without our providers being in fear of another state’s law interfering with their duty as a medical professional.”

Tami Martin of Equality California said the LGBT rights group supports the goal of the measure to protect people who come to California from the laws of other states.

The legislation “indicates to trans youth and their families that California welcomes them and that Californians continue to have the right to control their bodies and to live their lives authentically,” Martin said at the meeting.

State finance authorities say the measure would have a minor impact on the state’s budget if it becomes law.

Erin Friday, of Our Duty, an international group that opposes transgender ideology and mother of a “formerly trans-identified child,” said the monetary and human costs of the legislation will be much greater than proponents claim.

“The financial analysis of this bill completely misses the mark. … Where’s the cost of foster care? Where’s the cost for the runaways, homeless services, and MediCal? Every A.G. [Attorney General] in this country should be lining up to file a lawsuit against California,” said Friday, an attorney.

Aside from those expenses, the cost to minor children is “sterility, missing body parts [and] loss of sexual function,” she said.

Last week, the Food and Drug Administration warned of the risk of blindness and brain tumors from the use of puberty blockers.

According to the Mayo Clinic, puberty blockers may also have long-term effects on future fertility, and St. Louis Children’s Hospital has stated that puberty blockers may cause “less development of genital tissue, which may limit options for gender-affirming surgery (bottom surgery) later in life.”

Friday said SB 107 is unconstitutional, violates parental rights, and “obviates every custody agreement in the nation,” not just those in states that ban gender interventions for minors.

“This law codifies kidnapping and offers protections to a noncustodial parent who absconds with the child to California in order to get gender interventions in contravention of an out-of-state order or the custodial parent’s wishes,” she said. “Even more terrifying, this law encourages minors to run away … if their parents won’t consent.”

Friday pointed out that the UK’s only pediatric transgender clinic, Tavistock Centre, announced recently that it will close in the spring. She said the impending shutdown is because “the science does not support transitioning minors.”

During the hearing, many of the more than 45 people who called in to oppose the legislation were parents of teens who formerly identified as transgender.

When asked by Assemblyman Bill Quirk, a Democrat, to address concerns about puberty blockers and parental custody, Wiener dismissed the notion of adults without custody kidnapping children because of the legislation as a “wild exaggeration” and said gender-affirming treatments fall within accepted medical standards.

The legislation clearly prohibits extradition unless it violates the U.S. Constitution, such as in the case of kidnapping, Wiener said.

The proposed legislation would prohibit law enforcement in California from arresting or extraditing parents charged in other states or nations for child abuse or other crimes related to allowing minor children to receive “gender-affirming care,” including medical interventions such as puberty blockers, cross-sex hormone “therapy,” and surgery.

The measure would prohibit health care providers and contractors from releasing medical information “related to a person or entity allowing a child to receive gender-affirming health care.”

Assemblywoman Laurie Davies, a Republican, questioned the rationale of protecting parental rights to make medical decisions for their children on gender-affirming care, but not when it comes to vaccines.

“What about protecting the parents right not to have their kid vaccinated?” she asked.

“As a mother of trans identified youth, this is extremely important to the families. And there are horror stories across our nation of families who’ve gone through this process and at the same time had different outcomes. But, I think at this point, we have to find a way to protect people and make for the most successful outcome,” Wilson said.