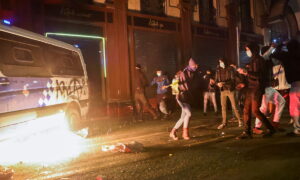 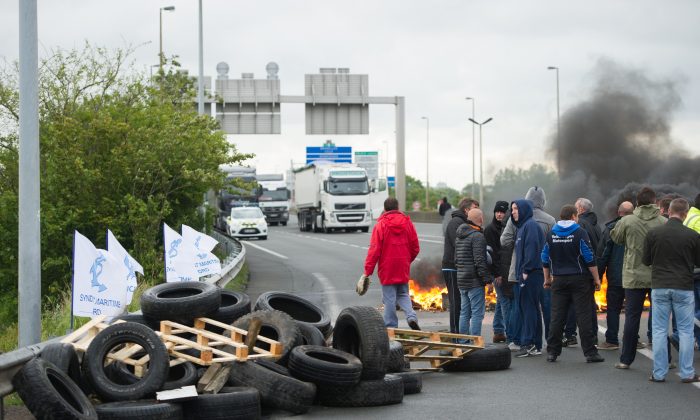 Striking ferry workers burn tyres as they block a ramp leading into the Eurotunnel before being dispersed by riot police in Calais, northern France, Tuesday, June 23, 2015. A strike by workers in the northern French port of Calais has left all passenger ferry service between the city and the English city of Dover suspended and briefly slowed traffic in the Eurotunnel. (AP)
Europe

PARIS—Eurostar said Tuesday it has canceled all passenger trains for the rest of the day through the tunnel that links France and England, after striking ferry workers swarmed the train line setting tires alight.

The rail company said all trains are returning to their cities of departure and none are stuck in the tunnel, which has been closed for all traffic until further notice.

The move followed a day of chaos in the French port city Calais that began before dawn. The strike by the ferry workers threw the Eurotunnel into disarray, as truckers who diverted to the train line got snarled in traffic and migrants hoping to reach England swarmed the vehicles, trying to sneak on board.

Video filmed near the entrance to the Eurotunnel showed migrants racing to catch a slow-moving truck.

Late Tuesday afternoon, about 50 strikers made it onto the tracks by the freight terminal building, torching tires and closing service in both directions, tunnel operator Eurotunnel said.

The union is protesting feared job cuts. Meanwhile, thousands of migrants are camped in Calais, hoping to make it to a better life in England.

Eurostar carries about 10 million passengers a year between Britain, France and Belgium through the Channel Tunnel.