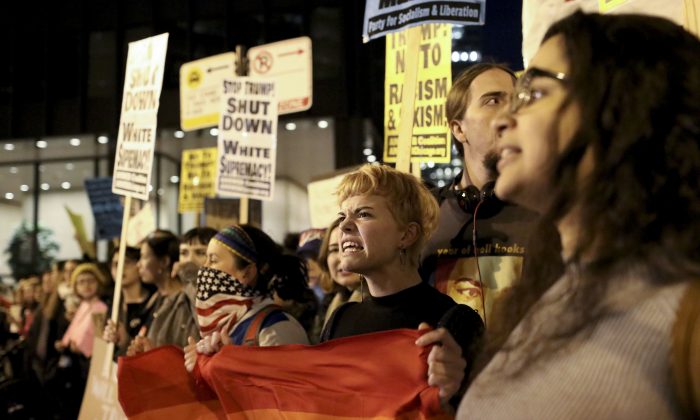 Has the ghost of Saul Alinsky, the noted community organizer, been invoked once again? If so, it may be in the form of protests against noted GOP congress members—or at the very least, his name will once against be featured heavily on conservative websites.

Press rewind and head back to eight years ago when President Barack Obama’s past as a community organizer in Chicago was dredged up. Some conservative critics have linked Obama’s previous job to Alinsky, with Alinsky biographer Sanford Horwitt noting that the former president was influenced by the writer and followed in his footsteps in Chicago.

Alinsky, who was born in 1909 and died in 1972, is a controversial figure for his community organizing tactics. While he is credited with implementing measures to improve the living conditions of the poor, some were critical of his tactics—outlined in “Rules for Radicals” in 1971—saying they were divisive and have negatively influenced U.S. politics, namely in the way political campaigns are done. His name has been invoked by conservative commentators as being effectively a Marxist, although Alinsky himself always denied being a communist and said he would never join the Communist Party.

However, similar to many communist writers—small-c or big-c alike—he cheered on class warfare and called for the government-mandated redistribution of wealth. He also worked with communists throughout his organizing career. In “Rules for Radicals,” he appears to display some sympathy for Marxism. He wrote: “A Marxist begins with his prime truth that all evils are caused by the exploitation of the proletariat by the capitalists. From this he logically proceeds to the revolution to end capitalism.”

In a recent article, The New York Post’s Paul Sperry is reporting that an Obama-linked activist group, Organizing for Action (OFA), has been sending out an Alinskyian training manual to activists protesting against President Donald Trump and Republican lawmakers.

Before Feb. 26, the group said in a call to action, activists need to move quickly against lawmakers, noting there’s “so much amazing energy out there right now,” and urges people to join its “organizing platform.”

The OFA makes no mention of Alinsky, and Obama never directly mentioned the author, but the Post notes that OFA’s platform could be reminiscent of the former president’s community organizing initiatives. Before he entered politics, Obama worked as an organizer for the Gamaliel Foundation FBCO organization in Chicago—and Marshall Ganz used community organizing techniques for the Obama’s first campaign in 2008. Out of that, Obama’s “Obama for America” turned into the OFA.

It’s worth noting that many community organizers and grassroots organizing models are taken from Alinsky’s work—particularly “Rules for Radicals.”

“A People’s Organization is dedicated to an eternal war. It is a war against poverty, misery, delinquency, disease, injustice, hopelessness, despair, and unhappiness. They are basically the same issues for which nations have gone to war in almost every generation…. War is not an intellectual debate, and in the war against social evils there are no rules of fair play,” he wrote. Furthermore, he argued that radicals should sow the seeds of discontent and create conditions ripe for a revolution.

Let’s take a more in-depth look at Alinsky’s tactics and personal philosophy. He argued that to gain a tactical advantage in a democratic society, conflict is a necessity.

Obama Shouldn’t Talk Now, for the Good of the Democratic Party

“When those who represent the status quo label you as an ‘agitator’ they are completely correct, for that is, in one word, your function—to agitate to the point of conflict,” he told fellow organizers.

He also said, “In order to organize, you must first polarize,” which requires a real—or manufactured—villain. He famously stated in 1971, a year before his death:  “Pick the target, freeze it, personalize it, and polarize it….One acts decisively only in the conviction that all the angels are on one side and all the devils on the other.”

Following Trump’s victory in November, Obama attempted to offer a somewhat optimistic view to his supporters—but he implied that he’ll remain involved politically.

“I’m going to be constrained with what I do with all of you until I am again a private citizen. But that’s not so far off,” Obama told activists who worked on his campaign and OFA members in a conference call in November, Politico reported at the time.

“You’re going to see me early next year and we’re going to be in a position where we can start cooking up all kinds of great stuff to do.”

The Post reported that the OFA has more than 32,000 community organizers, with another 25,000 actively undergoing training. They have to go through a six-week training program, which is steeped in Alinsky tactics.

During the 2008 campaign, right-wing commentators like Rush Limbaugh and Glenn Beck linked Obama to Alinsky—while former New York City Mayor Rudy Giuliani questioned Obama’s former job when he asked: “What does a community organizer actually do?”

As OFA gears up to protest Trump, readers may be seeing more references to Alinsky in their news this year.