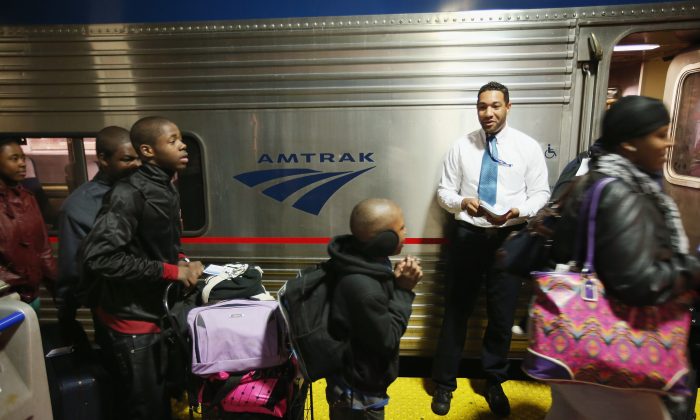 Train Travel and Discovering ‘A Voice of the South’

“I remember it cost either five or ten cents to ride the train. It was not too long a ride. It was fun, and a lot of us went to town like that on Saturdays,” my mother said as she reminisced about her teen years. She shared with me her fond memories of riding the train while growing up in the rural South. Typically, I either fly or drive if my trip involves traveling across several states; and I never have considered the train as a real option. My unfamiliarity with train travel allowed me to default to the collective images I have gleaned from TV or movies. The lack of actual experience, and limited information, fueled an inaccurate perception. I imagined long hours in a small seat that would nauseously shudder in sync with the movements of the train, and I would be surrounded by the high pitched, irritating, whistling sound of the engine. Yea, right. Choo, Choo!

It was the conversation with my Mom that made me curious enough to purchase a ticket. The closest train station was in a small rural city, and because I had arrived over an hour before departure, I had time to walk around. The station, with its structural design, wood benches, and white plaster antique ceiling, had the feel of a bygone era. Drawn in by the nostalgic atmosphere, I thought of those teenagers of the past, laughing, smiling, and chatting in a fog of excitement, as they waited for the train to go to town!

Eventually, I heard the horn of the train signaling its arrival. I stood in a loosely formed line of a few people as we watched the attendant place a yellow footstool on the ground. I was jolted out of my warm nostalgic feeling when I held up my iPhone in response to the attendant’s request to see my ticket. When I found my seat, I was pleasantly surprised to see how much space and legroom I had! As the train rolled down the track, I experienced a slight rocking that occurred with intermittent intensity that after a few minutes faded away into my subconscious. I enjoyed the quick sight of communities framed by the window like a post card picture as the train whisked through on tracks nestled between shrubs and trees. Soon, the shadows of the trees became invisible, and with the exception of a few small overhead lights, the interior of the train was dark. When the novelty of the ride slightly dimmed, I started reading a book I had purchased weeks ago.

While I actively sought out the new experience of riding a train, I never imagined that I would simultaneously be drawn into 19th century society by the words of a very gifted author who, in 1892, wrote about her experiences. This same author, born in North Carolina, no doubt traveled by train as she navigated the South. Her seminal work provides a view of American life from a perspective rarely heard: a 19th century Black feminist. In her intellectual critique of the social, educational and political climate of her era, she challenged preconceived notions about gender and race.

Anna Julia Cooper’s A Voice of the South, is courageously prophetic.   She gave a powerful voice to the plight of Black women who endured the tremendous weight of a society that marginalized, and or otherwise dismissed their abilities, and extinguished their dreams. Her challenges to the existing social structure, no doubt, served as one of many catalysts for positive change that, eventually, allowed for the expression of all voices.

It was now past midnight, and most of the passengers near me were sleeping. I was so engrossed in the novel that I tried to stay awake. Too tired to read further, I adjusted my chair, prepared to allow the humming noise of the train wheels to serenade me to sleep. As I listened to the unique music of the train wheels, I thought about how, tragically, the few Black female 19th century authors, have been relegated, undeservingly, to literary obscurity. Because of Cooper’s novel, I am now intrigued by the works of other 19th century authors.

As I enjoyed the soothing rocking of the train and its music, I thought about how far America has traveled since Cooper’s era. I also thought about how the train is symbolic of the essence of the great American experience. It is constantly adapting technologically for greater efficiency. Its non-discriminatory treatment of its passengers reflects positive social evolution. It travels throughout a land that is constantly being shaped by exterior forces. Yet, it keeps moving forward.

Those Southern teenager’s smiles, I imaged, were rooted in the joyous expectation of the next experience. Likewise, critiques offered in A Voice of the South, reflected a hopeful expectation that America could move forward so that all women could participate fully.

Eventually, I went to sleep content in having experienced riding the train, and discovering A Voice of the South, and looking forward to waking up at the next stop for the next adventure.