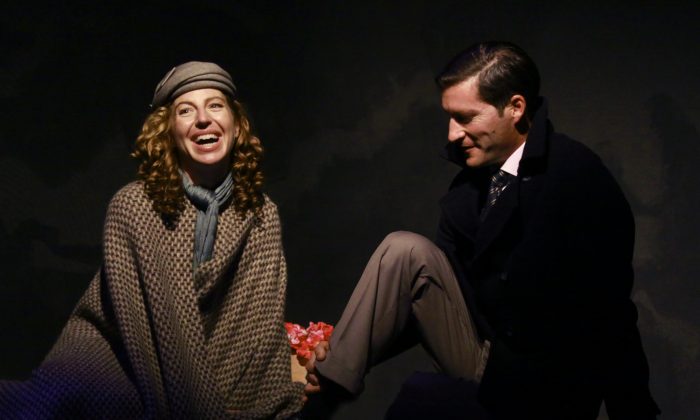 BEVERLY HILLS, Calif.—“My father would hate this” began Henry Jaglom, addressing a sold-out Laemmle Music Hall theater following the world premiere of his film “Train to Zakopane” on the evening of April 24, 2017, at the 2017 Los Angeles Jewish Film Festival in Beverly Hills.

It was a secret after all, a secret passed from father to son in the privacy of a study late into the night. But when your son is the prolific and accomplished storyteller Henry Jaglom, a story this compelling, universal, and relevant must be told.

So decades later, we see the true account of his then young father, Semyon Sapir (Mike Falkow): He’s a successful Jewish-Russian businessman, who had escaped a Bolshevik prison, crosses Poland on a train in 1928, and conceals his identity during an encounter with a fiercely anti-Semitic Polish nurse, Katia.

The weekend tryst that ensues and the stories that are revealed in the resort town of Zakopane become an important contribution to the grand archives of human experience, adding depth and nuance.

“Train to Zakopane” was originally written as a theater production that appeared at the Edgemar Center for Arts in Santa Monica in 2014. Jaglom and his loyal editor Ron Vignone adapted the play into this visually stunning black-and-white film, a significant departure from Jaglom’s impressive body of works, such as “Eating” and “Venice/Venice.”

But true to many of Jaglom’s films, “Train to Zakopane” deals with a significant social issue: It confronts xenophobia, which seems to be spreading like wildfire across the country and the world. Social media memes, or media in general, often inflame these sensitive and deeply embedded issues with provocative sound bites or by portraying these complex issues with two-dimensional character types.

This film, however, delicately yet unflinchingly unfolds prejudice and hatred, humanizing bigotry. This is achieved by the plot, good writing, and by well-rendered characters, as well as by performances that we can relate to, that we can identify with, and ultimately, that we can feel compassion for.

This is not an easy accomplishment, confessed Tanna Frederick, who plays Katia, as we talked about the film over drinks on a Saturday in May 2017. She explained the challenges of playing the character, as we sat at a trendy Santa Monica restaurant next-door to the theater where she was busy rehearsing for a new play at the time.

“This was the most difficult role I have ever played,” Frederick said.

“During the filming, we shot a scene in one take, [and afterward] I ran to the bathroom and threw up.”

“I needed to counter the emotional turmoil of the character with physicality,” said Frederick, who participated in two marathons while working on this film. “I got up at 3 a.m., ran 26 miles, and then went on stage.”

“I had to embody so much hatred and to constantly vacillate between [the] other and [the] familiar,” she said. “I had to make her charming, accessible, [and] real.”

In some fundamental way, Katia had to be loathsome—representing attitudes that should not be tolerated—and yet the audience would need to understand her and maybe even find love for her, as Semyon did.

By the actress’s willingness and ability to extend herself far beyond her own comfort to understand and then internalize Katia, we, the audience, can also rectify tensions of prejudice, on whatever side we find ourselves.

It seems that Frederick’s sacrifices to render authenticity in order to truly move audiences have yielded great success. Judging by the audience’s response on the night of the opening, viewers seemed genuinely engaged and stirred by the film.

During the Q & A following the film’s screening, someone asked Jaglom if he knew what became of the Polish nurse. Jaglom didn’t, but he offered Frederick’s hopeful and redemptive scenario: Katia, because of her experience of falling in love with a Jewish man who exhibited kindness, generosity, and refinement, and having been forced to examine and take responsibility for her anti-Semitic beliefs, became, perhaps, one of the Righteous Gentiles who later saved Jewish children during the war.

“Train to Zakopane” opens May 4 in selected theaters.