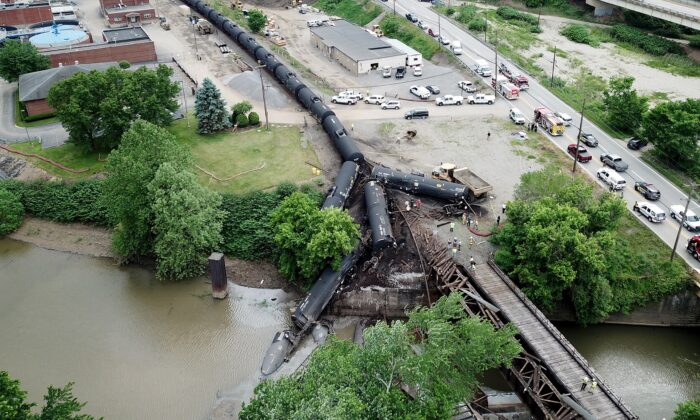 The scene of a derailed freight train that dumped several train cars into the Allegheny River in Harmar, Penn., on May 26, 2022. (Matt Freed/Pittsburgh Post-Gazette/TNS)
US News

PITTSBURGH—More than a dozen train cars derailed Thursday afternoon after a train collided with a dump truck in Harmar, sending many of the cars into an inlet along the Allegheny River.

County dispatchers said the derailment occurred around 3:50 p.m. in the 2400 block of Freeport Road in Harmar. The area is between the Hulton Bridge and Route 910 and near the Allegheny Valley Joint Sewage Authority Treatment Plant.

The train, operated by Norfolk Southern, collided with a dump truck crossing the tracks, the company said in a statement.

“Late this afternoon, one of our eastbound trains struck a dump truck carrying stone, which caused a derailment,” the statement said. “Thank you to the first responders who assisted our crew members. At this time, our personnel are on-site and working with local authorities to determine next steps.”

An official on the scene said 17 train cars derailed and several were in the water after the train struck the truck as it was crossing the tracks near the treatment plant. Harmar police said some of the tanks were leaking chemicals. It was not clear what materials were inside.

The driver of the truck and two people in the train engine were injured and taken to the hospital, the official said. He did not know the conditions of the injured.

The water line that serves Harmar was broken in the crash, the official said. Allegheny County hazmat crews and the Salvation Army were on the scene, in addition to police, fire and EMS crews.

Freeport Road is closed in both directions between the Hulton Bridge and Guys Run Road, according to PennDOT.