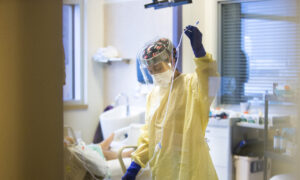 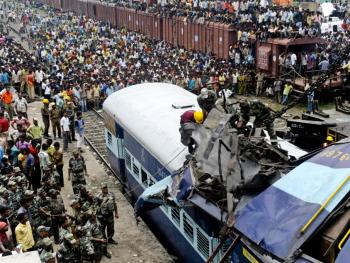 FATAL COLLISION: Rescue personnel in India conduct recovery operations on the mangled wreckage of a train following a railway accident in Sainthia, some 162 miles north of Kolkata, on July 19. (Deshakalyan Chowdhury/AFP/Getty Images)
World

Angela Wang
View profile
Follow
biggersmaller
Print
In the wee hours Monday morning, an express train in West Bengal, India smashed into the rear of another train that was stationary, leaving 63 confirmed dead and more than 90 injured.

Eight women and two babies were among those killed in the 1:50 a.m. crash, as were driver M.C. Dey and assistant driver N.K. Mandal. Officials said that the number of fatalities may still increase as rescue operations continue.

Five teams of the National Disaster Relief Force were dispatched to the scene to assist with rescue operations. A government media release said that families of the dead will receive about $10,600 in financial compensation plus one job for a family member. Each injured person will also be given approximately $530.

Eastern Railway General Manager V.N. Tripathi said he was not ruling out the possibility of sabotage. An investigation will be carried out into the cause of the crash, he said, adding that the driver had been very experienced.

Just two months ago, on May 28, a similar train incident happened in the region, killing 145 passengers. The hand of local Maoist group called the Naxalites was suspected and a number of Maoists insurgents were arrested. The Maoist group denied any involvement in the incident.

Railway Minister Mamata Banerjee, a native of the region who works closely to promote the welfare of the poor, children, and women urged an investigation.

“We have some doubt in our mind. Let us go to the spot. We are searching all the information. Because whatever is happening cannot be taken casually. So let us find out the details,” Banerjee told reporters when she learned about the accident.

Train incidents happen on a frequent basis in India. In the past 15 months, 12 mishaps have been reported, according to India Today.

On the other hand, West Bengal is one of the regions where the Naxalites operate. Violent conflicts and sabotage on different scales directed by the group often occur.

In April, Maoists rebels killed more than 75 police during an attack in Central India, said Reuters. A report from South Asia Terrorism Portal shows that more than 1,000 police and civilians were killed by Maoist attacks in the region of West Bengal alone in 2005.

Ban Ki-moon, secretary-general of the United Nations included the long time Maoist conflict in a recent report for the first time, adding the emphasis on the harm it has brought to children.

Ms. Bindu Bhatt, librarian of South and Southeast Asian Studies at Columbia University pointed out that the conclusion of the cause must be drawn carefully, as past train incidents in India were caused by various reasons. “Naxalites in West Bengal are quite a force no doubt. They also have a strong hold in other parts of northeast India. Also political parties are never shying away from trying to sabotage one another in the state,” said Ms Bhatt.