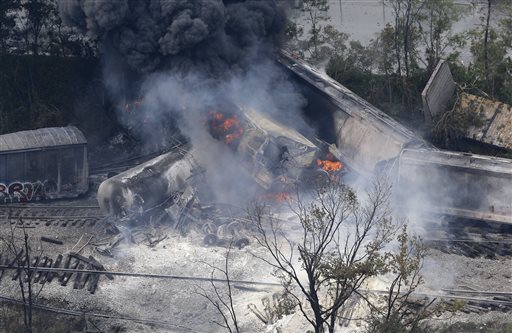 A fire burns at the site of a CSX freight train derailment, Tuesday, May 28, 2013, in Rosedale, Md., where fire officials say the train crashed into a trash truck, causing an explosion that rattled homes at least a half-mile away and collapsed nearby buildings, setting them on fire. (AP Photo/Patrick Semansky)
US

After a cargo train derailed in the early afternoon on May 28 near Baltimore, local officials and federal teams are trying to identified the chemicals the train was carrying.

CSX spokesman Gary Sease said in an email that on one of the cars was sodium chlorate, which the Department of Transportation classifies as a hazardous material. However, Baltimore County Fire Chief John Hohman said the chemical was not in one of the cars that was burning into the evening. The bleaching agent is used in making paper.

“When you mix them together and add fire they go boom,” he said in a phone interview.

Materer said the chemical is usually shipped as a white powder but it can also be in a liquid solution. Either way, he said, the fumes can irritate the lungs if inhaled.

One of the cars still burning was carrying terephthalic acid, and another was carrying fluoroacetic acid, Hohman said. Fluoroacetic acid is an “extremely toxic” constituent of many poisonous plants that is used to make products that kill rodents and deter coyotes, according to the National Institutes of Health website. It produces poisonous gases when burned, according to the NIH.

Materer said the gases contain chlorinated organics. He was less familiar with terephthalic acid but said it, too, contains chlorine.

People were being asked to evacuate 62, 63, and 64 Streets in White Marsh, a suburb of Baltimore, as well as some of the surrounding areas because of fears that inhaling the smoke could be harmful.

The people who chose to evacuate were being offered shelter at the Rosedale Volunteer Fire Company.

The fire was basically out after the previously thick plume lightened considerably around 6:30 p.m., and rain that started dropping a little later was helping finish the job.

The train went off the tracks at about 2 p.m. in White Marsh, about 10 miles northeast of Baltimore.

The fire is contained, according to Baltimore Sun reporter Justin George, citing Elise Armacost, director of public safety information for the county fire department. Officials are asking people in the area to stay inside and avoid the smoke until the exact chemicals are identified.

The derailment was caused by a collision between the train and a garbage truck. The driver of the truck is in stable condition after suffering serious injuries, and was taken to Maryland Shock Trauma.

The driver was later identified as John Alban Jr., a retired Baltimore County firefighter. It is not known if charges will be filed against him.

The National Transportation Safety Board is sending a go-team for the derailment and fire, it said via Twitter at about 4:15 p.m.

Dale Walston said he lives about a half-mile away from the blast site and that the smell of chemicals is very strong.

“It shook my house pretty violently and knocked things off the shelves,” he said in an email.

A thick plume of black smoke was emerging from the scene and was visible for miles, the smoke drifting across the Baltimore city line and covering the eastern part of the city. It was visible to motorists heading north on Interstate 95, through downtown Baltimore.

Different videos uploaded to YouTube showed area residents approaching the scene from different angles then dispersing after the explosion, which caught them off guard.

A worker at a nearby Dunkin Donuts, Tawan Rai, reached by phone, said he saw a fire and flames by the railroad tracks at first, then felt a thundering blast that sent smoke pouring into the sky.

“The whole building shook and there was just dust everywhere,” said Rai, adding no windows broke but he was surprised by the intensity of the blast. “I went outside and people were rushing there, the police officers, fire trucks.”

He also said he saw some ambulances arrive but didn’t see anyone injured.

He also said police had apparently stopped traffic on nearby Pulaski Highway not far from the tracks and he no longer had any customers at his donut shop.

An Epoch Times, Chinese edition reporter, saw the fire from Highway 95. “I’m a reporter driving outside of Baltimore on Highway 95. There’s a huge fire in the distance. Cars are slowing down. You can see the smoke. We are now at Exit 60 on Highway 95. I can’t determine exactly where the fire is at because of the trees blocking the view. I can tell now the fire is at a railroad coming from a freight train car. There are police patrolling at every exit. There is also a helicopter circling above the smoke.”

John Kane, treasurer of Atlantic Tire on nearby Pulaski Highway, said the explosion blew out two large showcase windows and light fixtures in his shop.

The derailment is the third serious one this month. In Bridgeport, Conn., on May 17, more than 70 people were injured when a commuter train derailed. The eastbound train from New York City went off the tracks during evening rush hour, came to a stop and was struck about 20 seconds later by a westbound train.

In Rockview, Mo., on Saturday, a cargo train crash injured seven people and destroyed a highway overpass that could take a year to repair.