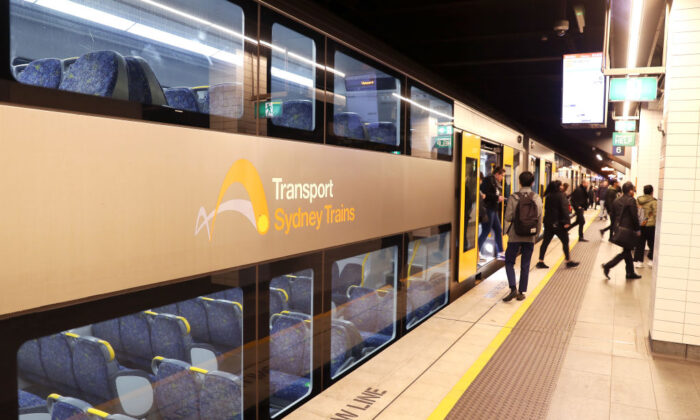 Passengers alight the train at Wynyard station on May 25, 2020 in Sydney, Australia. Additional security and marshalling staff will be on hand at major Sydney transport hubs as schools return to regular full-time lessons and business reopen as New South Wales continues to relax COVID-19 restrictions. (Mark Kolbe/Getty Images)
Australia

Four people have been injured after an early morning commuter passenger train derailed after crashing into an abandoned car on the tracks on the NSW South Coast line.

The crash happened on the same day the NSW rail network is already crippled by a strike affecting up to 70 percent of the city’s trains.

The train struck the unoccupied car that was on the tracks, which sent the first carriage catapulting off the tracks.

It landed on the side behind the Kembla Grange railway station.

NSW Ambulance said four crews were dispatched to the scene to attend to 11 people on board at the time of the derailment—nine passengers, the driver and a guard.

A man called Nick who was on the train on his way to Sydney has told radio 2GB he was lucky not to have been injured.

“It was like being on a trampoline. (We were) just bouncing up and down,” he said.

Police established a crime scene and are investigating, with help from Sydney Trains and NSW TrainLink.

“We are working closely with NSW Police who have established a crime scene, and emergency services who are on-site,” a spokesman said.

“Thankfully there haven’t been any serious injuries but two customers and two crew have been taken to hospital with minor injuries.

“We would like to thank the first responders for their assistance responding to this incident and helping our customers and staff.”

The crash has inflicted substantial damage to the overhead wiring and associated infrastructure, which is likely to have impacts on services for the day.

Commuters are advised to change trains at Wollongong or Albion Park to complete their journey.