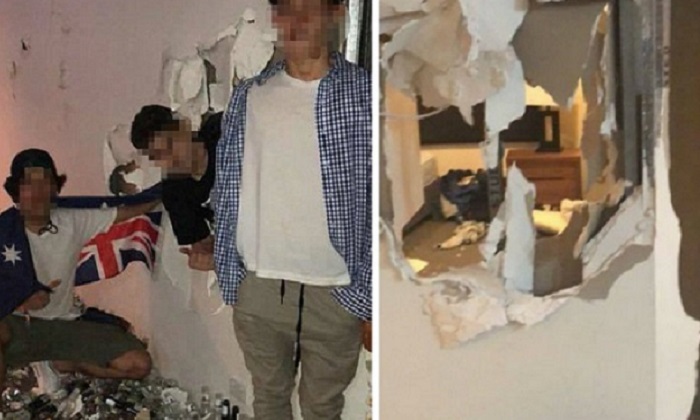 Some of the images posted on social media of the school leavers inside the penthouse’s near-destroyed interior. (Social media screenshots)
Australia

While most high school graduates celebrate moving onto the next stage of life without harming anyone else’s property, a bunch of so-called ‘schoolies’ in Australia have gained infamy by absolutely trashing a penthouse.

Social media has revealed the devastation wrought by five young males to a penthouse at the luxury Mantra Sun City Resort on Queensland’s Gold Coast.

There has been extensive damage to every wall of the penthouse. Alcohol bottles were strewn all over the floor.

“As soon as the property was made aware of the incident, we acted quickly to arrange for the perpetrators to leave the premises and be collected by their families,” said a Mantra spokeswoman, reported news.com.au.

“It is disappointing this has occurred because schoolies have been very well behaved this year,” she said.

The resort’s spokeswoman said that they are continuing to work with police over the act of vandalism.

The video has gone viral and has provoked strong criticism of the vandals.

“They should be IMMEDIATELY placed into custody and NOT released until the bill is payed in full… SIMPLE… Cheers,” said one man commenting on the video via Facebook.

A woman on Facebook was concerned that it would give other young people celebrating a bad name.

“This is the minority. Just as in general society there are bad eggs. I’m sure that there have been plenty of grown adults who have trashed hotel rooms. Don’t tar all schoolies with the same brush,” she wrote on Facebook.

Another wasn’t so forgiving.

“Total disregard for other person’s property. It’s about time schoolies was stopped. I could go on and on but everyone knows the damage they cause to all places on [the Gold Coast]. Ban schoolies,” wrote that Facebook user.

A group of schoolies could be charged after trashing a Gold Coast hotel room. #Schoolies #7News pic.twitter.com/X4MhCUjYbf

At the end of the final high school year, tens of thousands of school leavers – called schoolies – celebrate in tourist areas such as the Gold Coast.

News.com.au said that Queensland police arrested 41 people during the first weekend of the end-of-school revelries, with most offences relating to drug possession. Of those arrests, 22 were so-called ‘toolies’ – the derogatory slang description of non-schoolies who are typically older and try to join in on the celebrations. The other 19 arrests were schoolies.

Most schoolies are 18 years of age – the legal drinking age in Australia.

The Gold Coast is where Australia’s largest schoolies revelries are held. Some 22,000 final year graduates were expected to celebrate on the Gold Coast this week.