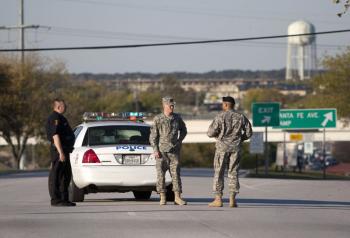 Members of the military and police stand outside Fort Hood on November 5, 2009 in Killeen, Texas. (Ben Sklar/Getty Images)
US

By Jim Fogarty
Print
One soldier has been wounded and arrested and two others were questioned by authorities and released Thursday in a mass shooting that claimed the lives of 12 and reportedly wounded 31 others at the Ft. Hood military base in Texas.

The base, located outside of Killeen, Texas, was open Thursday evening, as authorities continued to gather data and interview witnesses.

The shooting occurred at approximately 1:30 p.m. local time, at the base’s Soldier Readiness Processing Center, where soldiers are processed for overseas deployment.

Lieutenant General Robert Cone, at a televised base press conference Thursday afternoon, said that the “main shooter” was a soldier on the base, who used two handguns during the incident.

Gen. Cone stated there was no motive known as of yet. He added that two other soldiers were in custody for possible involvement with the shootings.

Some media sources late Thursday reported that the suspect was targeting individuals he knew during the shootings.

In comments from a speech published on the White House Web site, President Obama called the event a “horrific outburst of violence.”

He said it was difficult enough to lose servicemen and women in battle, but “horrifying that they should come under fire at an army base on American soil.”

Media reports continued to be updated into Thursday evening, including reports that the suspect was disgruntled over his pending deployment to the Middle East.

A co-worker, Col. Terry Lee (Ret.), said in a phone interview with Fox News, that Maj. Hasan did not want to be deployed to the Middle East.

The network interviewed the suspect’s cousin, who stated that Maj. Hasan, born and raised in the U.S., was upset over increasing harassment by fellow servicemen over his ethnicity.

There were reports that the shooter was killed by civilian police on the base.

Two soldiers detained and questioned by authorities were released later in the evening, and a different suspect was picked up for questioning, according to media reports.

Reports of shootings in other locations in the area could not be tied to the incident at Fort Hood, as of Thursday evening.

Fort Hood, a city unto itself, calls itself the “Home of America’s Armored Corps,” and is home of the Army’s 1st Calvary Division. The base, a transition point for those serving overseas, is the largest active service deployment base in the world, at 340 sq. miles in area. It is home to nearly 30,000 residents.