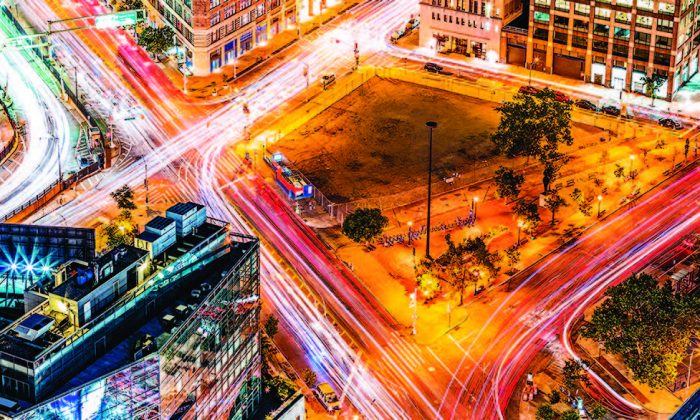 Traffic flows along Canal Street and Avenue of Americas in New York in this file photo. (MANDRITOIU/SHUTTERSTOCK)
Viewpoints

Reducing traffic rules and signs would make us safer

Most drivers focus on the fact that a green light gives them the right of way, regardless of what is around them. Green gives them the legal right to drive forward. However, it doesn’t guarantee that doing so will be safe.

Traffic engineers need to rig the signaling system to let people focus on the most basic condition of driving: For your sake and others, be safe. Increasingly, in Europe, they are addressing the problem in an unusual way: Fewer lights, stops, rules, and signals are better than more. Some cities are eliminating signs and signals at major intersections completely, based on the realization that individual, on-the-ground rationality works better than top-down rules.

In the 1960s, when libertarianism as a political outlook was just emerging, people made lots of fun of their obsession with laws and rules. Those people said that instead of saving civilization from barbarians, we spent all our time kvetching about the stop sign down the street.

It is a funny caricature. But every caricature contains some truth. Stop signs and traffic lights, on public property and enforced by agents of the state, can, in fact, have grimly coercive features. I rolled through one once, got a ticket, forgot to pay it, and found myself arrested during a Sunday brunch. As I languished in jail, I was given a poignant illustration of the maxim that every law is ultimately enforced at the point of a gun.

Here’s what’s interesting: It seems that libertarians did not, in fact, spend enough time kvetching about stop signs. Modern traffic theory is coming around to the view that signs, rules, and instructions have made the roads far less safe. When you remove them, the results point to a paradox: the less you tell people what to do, the better people are at figuring it out for themselves.

Vox media has made an interesting film about this theory in practice. They present it from purely an engineering perspective. Drivers need visual cues to govern how fast they are going. These cues are called “edge friction.” If you eliminate them all, traffic speeds up and drivers become less interested in and cautious about possible signs of danger around them. But when you add random cues all around–pedestrians, drivers of all sorts going every which way–people become attentive to others.

With shared space and no formal rules, everyone stays on the move but with a sense of navigating obstacles. This can have the effect of causing traffic overall to navigate the space better.

Maybe you have experienced this before in your town. The main light in the town center clogs the roads each and every day. Then one day the electricity goes out and so does the light. Drivers intuitively turn it into a causal four-way stop. For the first time ever, there is no clog. Everyone stays on the move but with caution.

Consider the implications of the American system of red lights and green lights. How many times have you had a clear lane with a red light that suddenly turns green? We naturally think that this means that we are safe to step on the gas. If there were no light at all, we would approach the situation very differently, looking out if anything could come our way.

It is the same with the texting and driving problem. Drivers need a reason to stop texting, something more than a law. If roads really were multiuse and filled with uncertainty, people would have to start paying attention rather than merely complying with signs and rules. They would have to engage their brains with the task at hand.

The texting-while-driving problem stems from the perception that the rules, signs, and signals keep us safe, so why not find something else to pay attention to, such as our social feed? If we drivers had an ongoing job to do, the incentives would change completely.

The big lesson here is that evolving patterns of adaptive behavior are more socially functional than laws and signs. In other words, the more that systems are structured to elicit the decentralized intelligence of drivers, the more likely they are to serve human welfare.

That’s the broader point about this microcosm that has gigantic implications about the macrocosm. If street intersections function better without top-down management and imposition, what about the rest of the social order? There are are other forms of accidents, wrecks, and pileups going on every day in the business world, all due to too much coercive management rather than trusting people to figure things out on their own.

F.A. Hayek’s main point against central planning is that it is impossible for minds operating outside the system to outthink the decentralized knowledge that is embedded in the social process of discovery, with its constantly changing conditions, multitudinous minds at work, and huge diffusion of plans. What emerges in a state of freedom are adaptive institutions and rules of thumb that make society function better than laws and legislation.

The gradual realization of a better way to manage traffic has implications that go far beyond how well cars navigate the intersection down the street. It should tell us something much larger: Liberty always works better than social and economic engineering managed from legislatures and bureaucracies. It’s not just about “edge friction”—it’s about life philosophy.

Jeffrey A. Tucker is director of content for the Foundation for Economic Education. This article was first published on FEE.org.