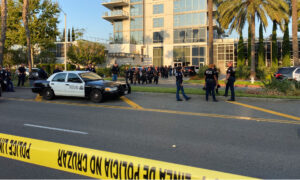 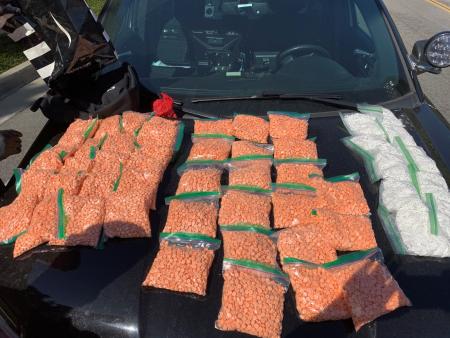 Police arrested and charged a 24-year-old Irvine man after discovering more than 50,000 pills packed in sandwich bags during a traffic stop. (Courtesy of the Orange County Sheriff's Department)
Southern California

The Orange County Sheriff’s Department (OCSD) says it seized an “incredibly substantial” number of illicit pills, stamped as known prescription medication, during a traffic stop and search warrant in Irvine.

Police said a 24-year-old Irvine man was pulled over March 31, and arrested after police discovered more than 50,000 pills packed in sandwich bags.

“The number of pills that were collected in this case was incredibly substantial,” OCSD spokesperson Carrie Braun told The Epoch Times on April 5.

“We don’t see that amount of pills on a very regular basis, especially not ones that are stamped for what we would refer to as prescription medication—Adderall and Xanax, but containing fentanyl is what made this particular seizure very noteworthy.”

The roadside seizure led to the issuance of a warrant to search the suspect’s Irvine residence, where police said investigators collected additional substances, including two pounds of the hallucinogenic psilocybin, 29 grams of cocaine, and 800 THC vape cartridges.

Investigators found an additional 6,515 pills of illicit Adderall containing methamphetamine, and 10,100 illicit Xanax pills containing fentanyl in the residence, along with two handguns, one assault rifle, and about $124,000 in cash, police said.

It is unclear if the pills were being marketed as Adderall and Xanax to the individuals attempting to purchase them, or if they knew methamphetamine and fentanyl were included.