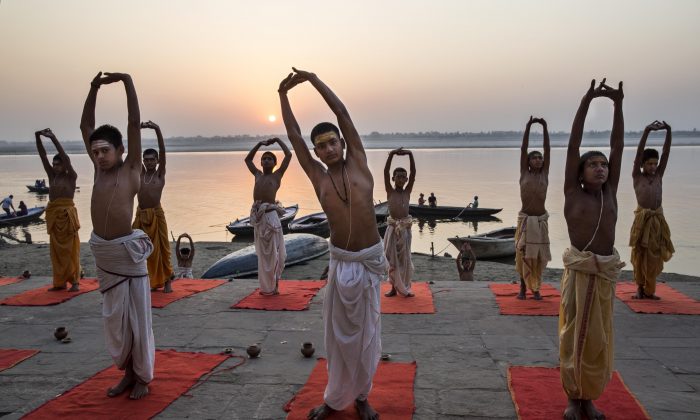 Young Indian perform yoga on a ghat on the Ganges River, at sunrise on April 23, 2014 in Varanasi, India. (Kevin Frayer/Getty Images)
India

NEW DELHI—The Indian government is encouraging traditional health care systems in the country, trying to popularize the medical knowledge that has been passed down for centuries.

For the first time since India gained Independence sixty-seven years ago, the government appointed a separate minister for promoting traditional medicine and practices, earlier this month.

The day before the announcement, Indian Prime Minister Narendra Modi said at the 6th World Ayurveda Congress in New Delhi that India’s health systems have been renowned around the world, but at home, they are being forgotten.

“Our ancient people considered health an aspect of living. Now health has been separated from living,” Modi bemoaned.

During the Ayurveda congress, the government sponsored free clinics to promote traditional medical treatments to the public.

The government said on Nov. 7 that it plans to better regulate and increase the quality of traditional Indian medicine so they can be sold on an estimated $100 billion global alternative medicine market.

A decade ago, the Indian government formed the Department of Ayurveda, Yoga and Naturopathy, Unani, Siddha and Homoeopathy (AYUSH), the most recognized traditional medicine systems in India. The department was tasked with promoting educating, researching, and standardizing these systems.

Shortly afterwards, the government certified over 230,000 traditional treatments and made them “public property” to keep foreign drug companies from patenting their ingredients.

This is because the government spent millions over the years fighting legal battles to lift the patents on basic ingredients for traditional Indian medicines like turmeric and Aloe Vera.

It took 200 researchers eight years to compile the database, which is now owned jointly by the Council of Scientific and Industrial Research (CSIR) and India’s Ministry of Health and Welfare.

India has more than 1 million traditional but un-certified doctors who have been practicing various traditional systems of medicine for generations and are still providing health care in regions where modern health care is not easily accessible.

The government recognizes that these doctors and practices are vital healthcare providers, and this year it allocated $174 million to promote and standardize their systems.

In September, while addressing the UN General Assembly in New York, Modi called for an International Yoga day to be held on June 21. Modi himself does Yoga everyday.

“Yoga should not be just an exercise for us, but it should be a means to get connected with the world and with nature,” he said.

So far, 50 countries have agreed to co-sponsor the proposal, which will soon be submitted to the UN secretariat, according to a Times of India report.