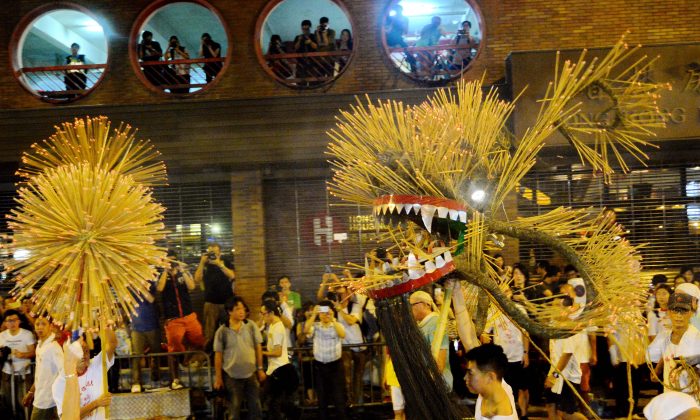 HONG KONG—The Mid-Autumn Festival, also known as the Reunion Festival, is one of the most important festivals celebrated by Chinese, Korean, and Vietnamese people. The phrase “reunion of both people and the moon” captures the mood of the celebration.

In addition to mooncakes and lanterns, the fire dragon dance is another centuries-old tradition for Hong Kong people. The dance can be found in the areas of Tai Hang, Pok Fu Lam, and Aberdeen.

Ng Kong Nan, an experienced fire dragon dancer from Pok Fu Lam, began to teach the craft at the youth centre a few years ago. Ng hoped to encourage youngsters to participate and realize the significance of the traditional festival, carrying on this piece of cultural heritage.

Every Mid-Autumn Festival, the Tai Hang area stages fire dragon dances for three consecutive nights to ward off plague and evil spirits. Although the Hong Kong Observatory issued typhoon warning signal No. 1, people still had a delightful time at Tai Hang this year.

Accompanied by gongs and drums, about 300 people held the 67-meter-long dragon, which was made up of 32 segments and had tens of thousands of incense sticks on its body. The swiftly moving dragon and the flying sparks from the incense attracted many spectators.

Due to a shortage of manpower, the dragon dance is now only held on the night of the Mid-Autumn Festival. In addition, Pok Fu Lam Village’s narrow lanes make it hard for the police to close the road.

To prevent this traditional craft from being lost, Ng Kong Nan was determined to find another way. Three years ago he worked with the youth centre and introduced the fire dragon dance to Aberdeen.

On the night of the Mid-Autumn Festival, both Pok Fu Lam and Aberdeen held fire dragon dances. The two teams then met at Waterfall Bay, where the ritual “Dragon returning to the sea” was held.

Ng explained the tradition of the fire dragon dance. He said that according to the elders, a plague once broke out in Pok Fu Lam. At that time, a villager received a deity’s guidance in a dream, advising him that the fire dragon dance could dispel the bad luck and bring in good luck.

Therefore, the tradition of the fire dragon dance has been upheld for two generations. Some ethnic groups, such as the Hakkas, also had the tradition, but the custom was lost among many.

Ng said it might be possible that the ancestors brought the custom from mainland China to Hong Kong. He said cheerfully that driving away the plague is backed up by science.

“In fact, incense can kill the germs. The folk custom is full of wisdom,” he said.

This year, everyone was concerned about the weather conditions during the Mid-Autumn Festival. However, Ng had no worries at all. He remembered that the fire dragon dance had never been cancelled due to rain or storms.

He said the rain would diminish once the drums started.

“Maybe the drums can dispel the evil, and the heavens will help us,” he said.

The Mid-Autumn Festival is also known as the Moon Festival. Some people worried that there would be a moonless Festival this year, but Ng advised a folk remedy for this.

“Previously in Pok Fu Lam Village, if the moon did not shine, the elders would strike a pot, inviting the moon to come out. Majestically, the moon would appear. So we indeed need to move the heavens with sincerity,” he said.

A well-made fire dragon is essential for a well-performed fire dragon dance. Mr. Nan said the fire dragon is made of hay, bamboo sticks, metal wire, and large sunflower leaves. The most complex part is the head.

“Choose the most beautiful bamboo for the dragon head,” he said. “The most important part of the crafting is the skeleton. If the skeleton is not strong enough, we will need to add two extra pieces of rattan. The core of the whole dragon is here.”

There are special requirements for the hay as well. Mr. Nan explained that the hay in Hong Kong is only for cattle or race horses. Nowadays, the villagers buy the hay from mainland China.

The dragon tail is constructed from large sunflower leaves, the whiskers are made of banyan tree roots, and the “Dragon Pearl” is made of a torch. Flashing lights are inserted into the fluff balls, forming a spectacular glowing dragon when lit.

This year, three different-sized dragons were in the celebrations. The small dragon dance was performed by children under 12 years old. For safety reasons, the incense was replaced by LED lights.

The Warehouse Teenage Club Ltd was the co-organiser of the fire dragon dance activities. The club manager, Guo Bishan, said it was good to see a fire dragon dance performed at Aberdeen and hoped the activity would encourage young people to learn the traditions.

“Traditional festivals are not simply for enjoyment of mooncakes or meals, but also for opportunities to communicate with family members and neighbours, and for the hospitality and warmth of human interaction,” Guo said.

Mid-Autumn Festival in the past

Today’s busy lifestyle has taken away some of the festive air of the traditional Mid-Autumn Festival. What did the old Festival look like? Epoch Times interviewed Ms. Yang, the boss of the Sichuan restaurant Wing Lai Yuen.

She explained, “The festival started in the morning. The Mid-Autumn Festival represents reunion, so you were not supposed to break anything. If you accidentally broke something, you had to say ‘Suisui [year after year] peaceful.'”

“You could only say auspicious words on that day,” she added. “Whether you were busy or not, or you were away from home, you had to return home to reunite with family members and to celebrate, even if you had to go after the reunion.”

In the past, there was a worship tradition during the Mid-Autumn Festival. Ms. Yang said that when dinner was ready, the family would worship the ancestors, expressing their gratitude for blessings from the ancestors and praying for a plentiful harvest and good health for the children. Then the whole family would sit down for dinner.

The climax of the day happened after dinner, when the whole family gave their worship to the moonlight. Moonlight worship had special requirements for the offering and normally included taro, water chestnuts, fruit, and so on.

Five types of fruits, called “five treasures,” had to be presented: persimmons, pears, bananas, grapes, and pomelos. They represented “five blessings,” “carrying things through,” “wealth,” “good fortune,” and “many children and grandchildren to come.”

The grapes had to be intact, representing “one hundred children and one thousand grandchildren.” After the moonlight worship, everyone could enjoy mooncakes, Pu-erh tea, and fruit.

“When I was young, the Mid-Autumn Festival was full of fun,” Ms. Yang remembered. “After the moonlight worship, the children began to play with lanterns. Parents would put candles inside hollowed pomelos for the kids to play with. The children could also play with fireworks. It was really fun! The elders would not allow any sad faces, arguments, or fights, and everyone had to say prosperous words.”

In addition to the mooncakes, there was a cake called “pig cage cake.” Ms. Yang said the cake was not delicious, but the kids all wanted to try it. At the beginning of August in the lunar calendar, parents would give children a cute piglet cake inside a bamboo cage, with a red paper flower next to the cage. The children could look at the cake, but only after the moonlight worship could they enjoy it.

The piglet cake would already be hard by Aug 15 of the lunar year, when the Festival took place. The piglet inside the cage was meant to motivate the children to study hard.

“Nowadays there is plenty of food at the market, and McDonald’s will make them happy. Who will be excited about a pig cage cake?” she said.

Simon Wong, chairman of the Hong Kong Federation of Restaurants and Related Trades, said that the majority of young people do not like mooncakes, but new flavours might attract some young people. It is too early to know the sales situation of this year, he said.

Miss Huangyan Zhen from Taiwan Sunnyhills said the company’s sales in the first half year declined slightly, but the Mid-Autumn Festival has remained at almost the same level as last year, and many young customers have been attracted.