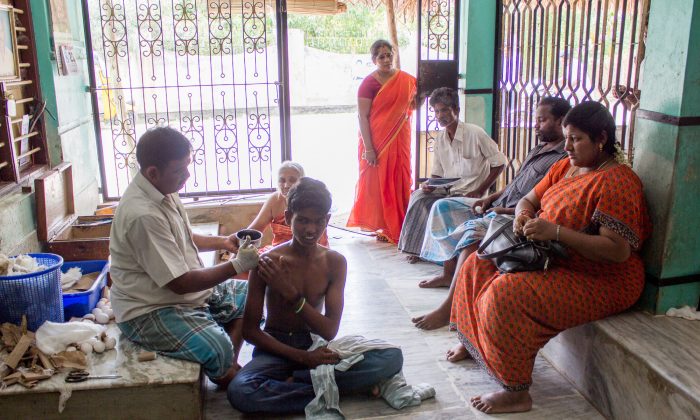 A traditional bone-setting healer applies an herbal paste to a boy in the village of Abishegapakkam in Puducherry on the southeast coast of India on Aug. 8, 2014. (Tatiana Vinodagrova)
India

The three brothers, Murugappan R., Ayappan, and Kannan are third generation healers who work out of a small, one-room clinic in the village of Abishegapakkam in the territory of Puducherry on the southeast coast of India.

While they live in a small, remote village of about 400 families, they have no shortage of patients.

On a weekday in January, people lined the walls, standing and sitting, while over a hundred waited outside in an open-air shelter.

The first thing the healers did for a patient was to feel the area where the fracture, dislocation, or sprain occurred.

“Touching the bones he [Murugappan ] can tell what the problem is,” explained Hariharan M., Murugappan’s 18 year-old-son.

Touching the bones, he can tell what the problem is.
— Hariharan M., son of a traditional bone healer Murugappan R.

Their movements were brisk, even rough, and drew a cry of pain from some of the patients whose body parts they twisted and prodded to assess the damage. Their hands moved quickly and deftly, showing the skill and practice these healers have accumulated over years of experience.

Their technical expertise is one part of the practice; the other part is the compress they use on top of the injury. It is made from a commonly-found herb called “Tinnevelly senna” in English, or by its botanical name Cassia lanceolata.

The healing powers of Tinnevelly senna were discovered in 1881 by a man called K. Kesava Raj, according to a study in the Journal of Ayurveda and Integral medicine called “Puttur kattu (bandage) – A traditional bone setting practice in south India.”

According to the study, Raj discovered the herb when he wrapped a hurt rabbit in the leaves of the plant and noticed that the rabbit recovered more quickly than he expected.

The puttur kattu healers grind the plant into a fine powder and then mix it with other ingredients and apply it to the area around the injury.They then wrap body part with gauze, and in some cases a bamboo stick to keep the bones in place.

Besides that, they only use a simple sling on some patients made out of the same gauze used to wrap the body part.

The brothers are at least the third generation of healers in their family, though they don’t know from who or where their grandfather learned the practice.

Like other traditional healing methods in India, it is more about providing a service to the community than about making money.

“I learned it to serve people,” said Murugappan R., the oldest of the three brothers.

In comparison, at a nursing home called Valli Vilas near Puducherry, the treatment for two broken ankle bones would cost 35,000 rupees ($564).

But it’s not just the poor and uneducated who visit these types of healers.

The aforementioned study on puttur kattu, which was done on a clinic in the southwest state of Andhra Pradesh over a three-year period, found that nearly 51 percent of the 146 patients they interviewed had been admitted to college.

“Education is not a barrier to patronize this traditional treatment,” the study concluded.

The follow-up study of 52 of the patients at the clinic found that 37 of them (71 percent) were satisfied with their treatment, but more research was needed to better assess the effectiveness of the practice, the study concluded.

In a country like India where the public health system is poor and traditional medicine perceived as effective and cheap, traditional healers like these remain popular among all classes of society in India.

Update: The English and botanical name for the plant used in the compress were exchanged for the Tamil name.