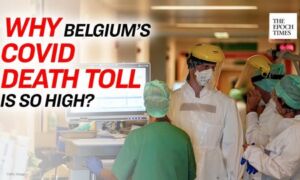 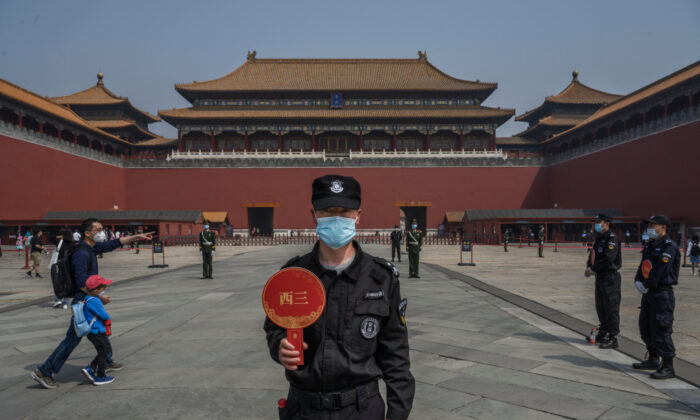 A Chinese guard wears a protective mask as he stands at the entrance to the Forbidden City as it re-opened to limited visitors or the May holiday, in Beijing, China, on May 1, 2020. (Kevin Frayer/Getty Images)
Thinking About China

Trading With the Devil

The Chinese Communist Party (CCP) isn’t used to being pushed around.

But U.S. President Donald Trump knows how to shove, and he can shove pretty hard when he sets his mind to it. Within the space of a year or so, from 2018 to 2019, he trashed all of the fundamentally imbalanced trade arrangements that China had built its wealth upon at the expense of U.S. manufacturers over the past 40 years.

No one was surprised, therefore, at Beijing’s reaction to Trump’s hard-hitting trade war and stiff tariff policies toward Chinese products. A big part of China’s initial response was to resort to retaliatory trade practices against U.S. products, such as canceling purchases of U.S. soybeans and other agricultural products.

Not coincidentally, China was also punishing states that supported Trump in the 2016 election. That was clever on Beijing’s part, but it changed nothing. Trump kept hammering the Chinese economy with his tariffs, and the Chinese economy kept declining. Even now, amid the United States’ 2020 election season, China’s targeting of pro-Trump states is designed to erode support for the one man the regime can’t tolerate as president of the United States.

Meanwhile, U.S. legislators are trying to strip China of legal immunity, which would enable U.S. citizens to sue China for damages from the COVID-19 pandemic.

At the same time, China’s global strategy was a bit smarter. The idea was to isolate the United States from its allies, especially those that were heavily dependent upon China for trade. The thinking in Beijing was that, for most nations, their lucrative trade relations with China would trump political, cultural, and even military alliances with the United States.

And for a while, that was true, at least in some instances. Until recently, Australia was a perfect example of that policy. It has been, of course, closely aligned with the United States since World War I.

But as a lightly populated country rich in natural resources and in relatively close proximity, Australia relies on China as a major market for its commodities. Those include a variety of minerals, coal, gas, and ore, as well as barley and beef. In short, Australia has benefited greatly from China’s economic rise.

Today, in terms of both imports and exports, China is Australia’s largest trading partner. Australia imports about 25 percent of its manufactured goods from China, and up to 13 percent of its coal exports go to China.

As such, Australia posed a terrific opportunity for Beijing to deepen and expand its economic and cultural relationships with a close U.S. ally.

That explains why, as late as May 2019, former Australian Prime Minister Julia Gillard insisted that Australia wouldn’t take sides in the U.S.–China trade disputes. It was an understandable but tenuous balancing act that made some sense at the time. Australia didn’t wish to jeopardize its deep trading relationship with China.

It wasn’t that successive Australian governments haven’t been aware of Beijing’s grand plans for a global presence in every sphere of activity. It’s no secret that technological, military, and cultural preeminence are also part of China’s ambitions.

But what could Australia do about it? Containing Beijing was far beyond Canberra’s capabilities. If it was anybody’s job to do so, it was Washington’s.

And until recently, Canberra was behaving just as Beijing hoped it would.

But then Beijing sabotaged its smartest strategy.

These days, Australia is seeking to manage the risks that come with relying so heavily upon one market, particularly one that has demonstrated its willingness to bully its own people and trading partners alike.

Today, like much of the world, Australia now understands two very important facts about China that can no longer be ignored.

First, Beijing’s monstrous extradition bill and the Hong Kong crisis that followed was just a preview of the CCP’s treachery. But the viral outbreak that followed in late 2019 was the real deal-breaker. The pandemic that destroyed the world’s economies shattered any remaining illusions—self-imposed or otherwise—that Australia and many other trading partners may have held with respect to China’s view of other nations.

For many Western nations, including Australia, the CCP’s own actions have made neutrality untenable. It’s simply no longer wise or even politically or morally viable.

Not only did the CCP lie about virus’s origin and the timing of the outbreak, the Party leadership silenced its own doctors, denied that it could be transmitted human-to-human, and withheld critical scientific information from the rest of the world.

As a result, China has clearly shown that it’s an outlaw nation. Most countries now understand that the regime in Beijing operates without any regard for human life—not for its own citizens, nor the rest of the world.

To its great credit, Australia recently issued a call for an investigation into the source and cause of the pandemic, even though it’s costing them dearly in exports to China. Australia has been unequivocal that going forward, in the grand struggle that’s rapidly unfolding between the United States and China, they’re siding with the United States.

But Australia isn’t the only nation to wake up to the China threat. With Trump pressuring an intransigent UK government to dump Huawei as a 5G telecom equipment provider, the U.S.–UK “special relationship” was becoming decidedly “less special” the past couple of years. For many months, Trump threatened Britain with fewer trade opportunities and lowering security cooperation levels if the UK approved Huawei as a participating 5G vendor.

UK Prime Minister Boris Johnson, however, not inclined to be seen as a performing monkey to U.S. demands, wasn’t in a cooperating mood on that very sensitive issue. Thus, the “Huawei question” presented a brilliant opportunity for China to split the U.S.–UK alliance wider than it’s been in centuries.

But Beijing’s initial handling of the epidemic allowed the virus to infect the world—including Johnson—and has all but destroyed any chance that Huawei will be a part of the UK’s 5G upgrade. In fact, the UK is now reviewing every aspect of how it views the Chinese regime.

Despite its grandiose propaganda and its overt puppeteering of World Health Organization Director-General Tedros Adhanom Ghebreyesus, most of the civilized world understands that China is solely responsible for the pandemic.

The Party’s apparent attempt to use the CCP virus to springboard into a position of global leadership demonstrates the fact that dictatorial regimes that answer to no one have little understanding of those democratic ones that do. As a result, the brutes in Beijing lack the vision and nuance needed to understand Western nations’ reaction to the CCP’s most egregious crimes against humanity.

The Faustian trade deals that many Western nations made with China are crumbling more each day, as the Chinese Communist Party shows them just what it means to make a deal with the devil.