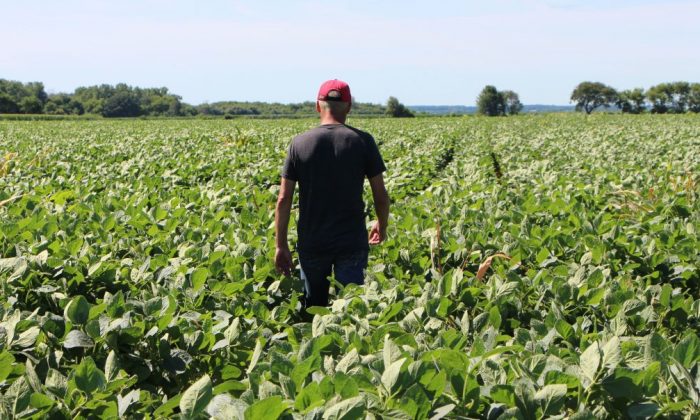 Trade War Turns Out to Be a Boon for Some Companies

One of the world’s largest agricultural trading companies, Archer Daniels Midland Co. (NYSE: ADM), doubled its net profit in the second quarter and beat analysts’ expectations, partly because of the U.S.–China trade war.

ADM is among many S&P 500 companies that have weathered growing trade tensions to report strong results in the second quarter of 2018.

“We are monitoring the U.S.–China trade situation closely, and are prepared for various potential outcomes,” Juan Luciano, chairman and CEO of ADM, said on an earnings conference call on July 31. “We believe the situation is manageable in the near term and we are confident of delivering solid execution and strong results.”

The Chicago-based company, a dominant player in the global grain trading and processing market, is among the companies that have strongly opposed President Donald Trump’s tariffs.

Yet in the second quarter, the operating profit for ADM’s origination business, which includes grain trading, more than tripled from a year ago, reaching $189 million.

“The short crops in South America, as well as increased purchases from that region by China in anticipation of tariffs, offered motivation for other buyers to come to the United States,” ADM Chief Financial Officer Ray Young said during the call. “The result was significantly higher volumes and margins for corn, wheat and soybean exports.”

ADM’s shares rose by 5 percent in three days after the earnings release, to reach a three-year high.

“I sort of think this tariff is good for you,” Morgan Stanley analyst Vincent Andrews told ADM’s executives during the earnings call. According to Andrews, the volatility from Chinese soybean tariffs and supply disruptions in South America have worked in ADM’s favor.

In early July, China implemented a 25 percent import tax on several commodities from the United States including soybeans, in reaction to tariffs imposed by the Trump administration on Chinese goods.

As a result, soybean prices have plummeted, hurting U.S. farmers. Since the beginning of trade disputes in early April, soybean prices in Chicago have fallen 16 percent, Andrews wrote in a report. However, he thinks the prices will recover as China is still dependent on U.S. soybeans in the medium term.

“Chicago prices fell as Chinese consumers shifted purchases to South America in advance of the import tariff increase,” he said. “But Brazil and Argentina are unable to supply all of China’s needs, especially after both a drought that led to a 40 percent year-on-year fall in  Argentine production and freight issues in Brazil.”

Andrews said China would have to buy U.S. soybeans by the fourth quarter of this year.

The Minnesota-based agricultural merchant has been one of the leading voices opposing Trump’s tariffs on China and other countries. The company’s origination and processing segment, however, posted its best fiscal fourth quarter in seven years.

“For most of fiscal 2018, rising demand for grains and oilseeds was muted by big crops, building stocks, and low market volatility,” Cargill said in a statement. “Toward year-end, this changed, as drought in Argentina and other market forces began to influence global flows of corn, soybeans and related products.”

In recent quarters, tariffs have become a more frequent topic of discussion by company executives on earnings calls. Given the implications of tariffs for profits, companies in the S&P 500 feel the urge to comment on the ongoing trade war.

Despite worries, the majority of S&P 500 companies have yet to see a negative impact from tariffs, according to data provider FactSet.

Out of 70 companies, only 19 said the tariffs had at least a “modest” negative impact on company’s earnings or would have a potential negative impact in future quarters, wrote the same report.

Companies in the industrial sector commented on tariffs more than those of other sectors. Honeywell International Inc. and 3M Co. were among companies that noted limited exposure to rising tariffs.

“Based on the tariffs enacted to-date and our mitigation actions across the portfolio, we anticipate a minimal impact to our overall business results in 2018,” Greg Lewis, CFO of Honeywell, said on a July 20 earnings call.

Nick Gangestad, CFO of 3M, said on a July 24 conference call that the steel and aluminum tariffs have “a fairly immaterial impact on us.”

“We estimate that to be approximately $10 million, or a penny of share, on an annualized basis,” said Gangestad.

“As we look ahead at the second half of 2018, our agricultural products group will continue to face challenges in the export grain market from high global supplies, foreign tariffs, and a low protein wheat crop,” Elizabeth Whited, chief marketing officer of Union Pacific, said during an earnings call on July 19.

If the tariff retaliation escalates, some companies may have to revise their guidance for future earnings. Don Allan, CFO of Stanley Black & Decker, said on July 20 that an additional $200 billion in tariffs on Chinese goods create uncertainty for his company’s future earnings.

“We have not included the impact of these tariffs in our guidance, due to the uncertainty around implementation, timing, and the product categories that will ultimately be included,” he said.